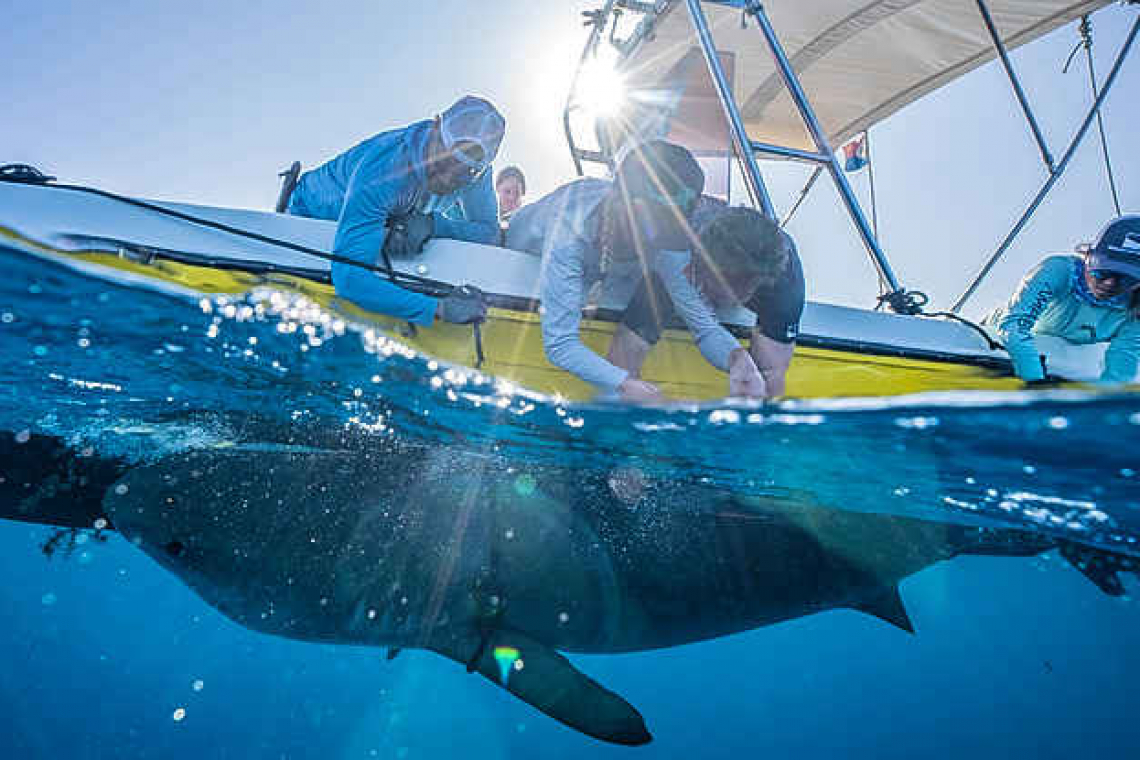 A shark being tagged in the Caribbean Sea. Photo by Sami Kattan of Beneath the Waves.

The Shark Shakedown team used high-definition ultrasound technology to identify the female tiger shark’s stage of pregnancy. Using satellite tracking over the next few months, the research team hopes to find evidence that St. Maarten is a breeding location for these threatened animals.

Beneath the Waves chief scientist Austin Gallagher also placed a camera tag on another tiger shark during the mid-April expedition.

Preliminary data from the satellite and camera tags have shown that the tiger sharks prefer to travel in the waters between St. Maarten and St. Barths. However, DCNA cautions against reading too much into these early results.

The information uncovered as a result of this project will “provide a better understanding of the importance of sharks in St. Maarten’s territorial waters and in Yarari Sanctuary, as well as the key role these ecosystems play in the lifecycle of tiger sharks in the wider Caribbean region,” said DCNA.

Shark Shakedown was a part of a wider research project into the region’s tiger sharks, which is being funded by World Wide Fund (WWF) for Nature in the Netherlands and the Dutch National Postcode Lottery.

Tiger sharks are large, apex predators found throughout the world’s oceans, and are currently categorised as near threatened by International Union for Conservation of Nature (IUCN).

There is little data about the reproductive biology of tiger sharks, but a previous study by Wageningen University indicated that the Saba Bank might be an important nursery for juveniles.

Nature Foundation, SCF, and DCNA are scheduled to conduct another research project on the Saba Bank in August, which will seek to determine whether the area is a breeding ground for tiger sharks in the Eastern Caribbean.

During the mid-April expedition, members of the three Dutch Caribbean nature conservation organisations received hands-on training from Beneath the Waves personnel to help them prepare for the upcoming Saba Bank excursion.