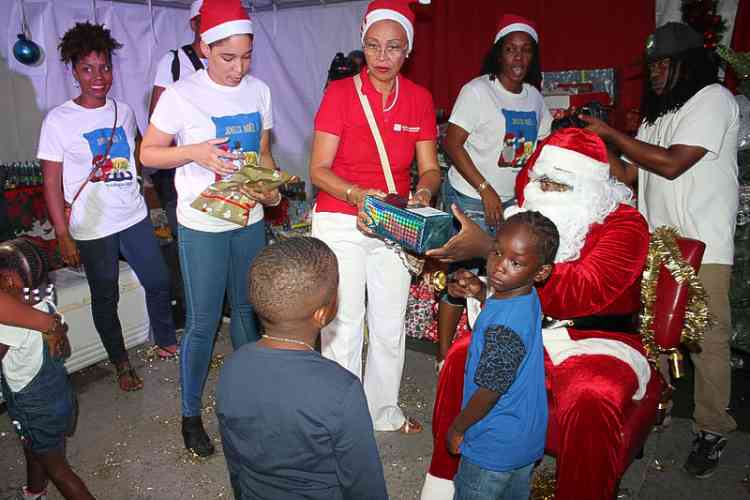 Waiting for the arrival of Father Christmas, the waterfront was packed solid with children and parents. (Robert Luckockphoto)

MARIGOT–The Marigot waterfront came alive on Wednesday evening for the Grand Finale of the Collectivité’s Christmas Serenade Festival, the culmination of weeks of Christmas Village activities held in the six districts.

The entire parking area in front of the ferry terminal was cordoned off to install the stage and the many local food stands and activities. While several local artistes and dancers performed during the evening – Misé Sadik, Riddla and Jimmy Devarieux to name a few, including the much-anticipated headlining act, “Cactus Cho” from Guadeloupe, a choral group of 40 singers and musicians – emphasis during the early part of the evening was on the arrival of Father Christmas at 5:30pm who presented some 3,000 gifts to St. Martin children ages three to 12 years.

Air Caraïbes weeks ago had launched an appeal to the inhabitants of Guadeloupe for gifts to be donated for St. Martin children, and those gifts arrived on an Air Caraïbes flight with Father Christmas Wednesday morning.

Parents were asked to register their children on the waterfront for a gift from 2:00pm onwards. The three age brackets were three to five, six to eight and nine to 12. Each age bracket was represented by a different coloured bracelet.

Hundreds of children and their parents waited in line in front of a tent where Father Christmas handed out the gifts. Entry to the tent with a one way in and one way out was strictly controlled by volunteers, Air Caraïbes staff and security to prevent any rush. Aside from occasional pushing and shoving no major incidents were reported. Emcee Dutty Sham made repeated calls for parents to watch their children.

With Funtopia members providing spontaneous entertainment for children, the music, the food, the ambiance, the event – partly sponsored by the Collectivité and St. Martin Tourism Office – was just what the French side needed to raise its spirits after the hurricanes and the timing could not have been better.

Heavy rain at one point during the evening caused a delay in the proceedings with the show finally ending at 12:30am instead of 11:00pm.

Commented one member of the public enjoying the atmosphere: “This is just what Marigot needed. We should have this for the whole week, not just one day.”