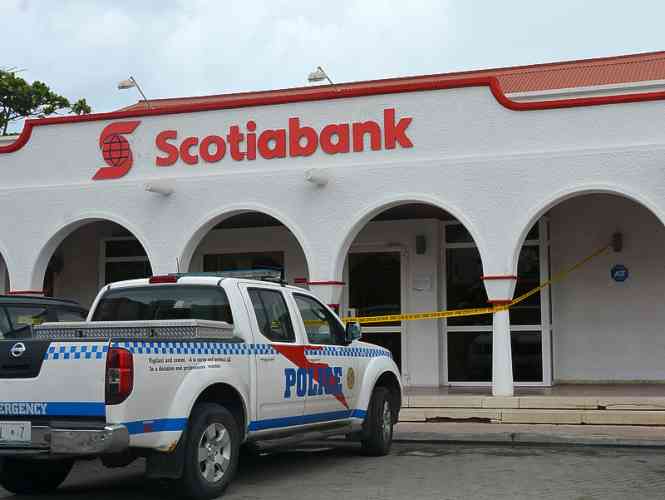 PHILIPSBURG–Sheldon E.L. Williams (24) was sentenced by the Court of Appeals to 42 months on Wednesday. Judges considered him an accessory to the armed robbery of Scotiabank at Simpson Bay Yacht Club on June 9, 2017.

The Court acquitted him of armed robbery charges as it could only be proven that he was the driver of the getaway car used in the robbery during which three perpetrators, who in the meantime have all been irrevocably convicted, took US $1,700 in cash, as well as cell phones and personal documents from bank staff and visitors.

The Prosecutor’s Office held Williams for an accomplice to armed robbery and called for a prison sentence of six years during the hearing of the defendant’s appeal against his conviction.

The Appeals Court said in Wednesday’s verdict that Williams was not actively involved in the execution of the robbery and that it could not be established that he had played a bigger role than that of the driver of the getaway car.

On February 7, the Court of First Instance had found Williams also guilty of possession of an illegal firearm. The Appeals Court said of this charge that it was obvious that being the driver of the getaway car Williams must have seen that the co-suspects had firearms at any moment. One of them was actually carrying an AK-47 assault rifle.

In the Appeals Court’s opinion, however, this was insufficient evidence to assume that Williams had “deliberately and closely” cooperated with his co-defendants where the possession of illegal firearms was concerned.

When Williams participated in the Scotiabank robbery, he was on probation for another violent crime for which he had been sentenced on January 12, 2017, to 16 months, six of which were suspended, with mandatory treatment at Turning Point rehabilitation centre.

In April, the Prosecutor had called for the execution of the conditional six-month sentence but on lawyer Safira Ibrahim’s request the Court decided to put the request on hold until after the handling of the appeal.

Williams was wounded during his arrest, as he was bitten by a police dog. He was found hiding in the bushes. The Appeals Court judges said it was “regrettable” that the defendant was injured during his arrest but called the police violence “proportionate.” Therefore, the Court did not see any reason to lower the punishment due to the deployment of a police dog during the arrest.