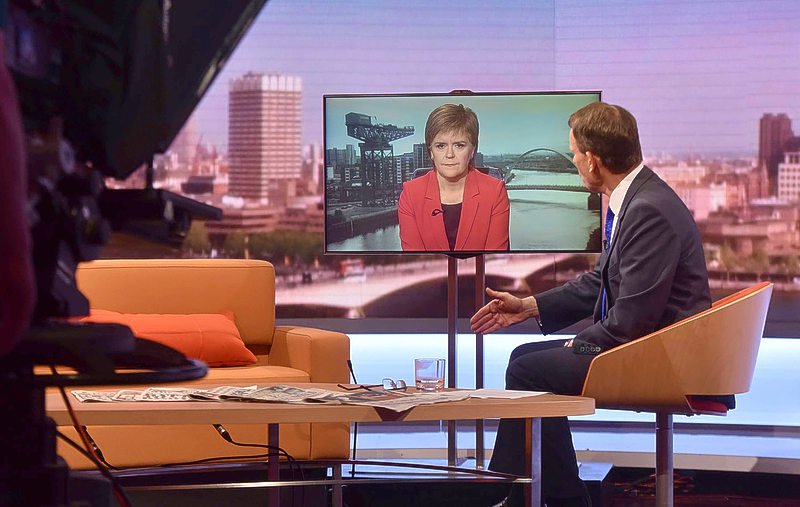 LONDON–Scotland will do whatever it takes to remain in the European Union, including potentially blocking the legal process behind Britain’s exit from the bloc, First Minister Nicola Sturgeon said on Sunday.

Scotland, a nation of five million people, voted to stay in the EU by 62 to 38 percent in Thursday’s referendum, putting it at odds with the United Kingdom as a whole, which voted by 52 to 48 percent in favour of an exit from the bloc, or Brexit. Sturgeon has said a new Scottish referendum on independence from the rest of the UK is “highly likely” if that is the best option to keep Scotland in the bloc.
“There are going to be deeply damaging and painful consequences of the process of trying to extricate the UK from the EU. I want to try and protect Scotland from that,” Sturgeon told BBC television.
Scots voted against independence by 55 to 45 percent in a 2014 referendum, after a campaign during which remaining in the EU was presented as a key reason to stick with the UK. Scottish newspaper the Sunday Post published a poll by research firm ScotPulse, taken on Friday, that suggested support for independence had surged to 59 percent since the Brexit vote.
Sturgeon said she would seek a way of negotiating directly with the EU on the best way to achieve Scotland’s aim of staying in the bloc. She said it would be “completely unacceptable” for whoever succeeds David Cameron as British prime minister to try and stop Scotland from holding a second independence referendum on the basis that the issue had been settled in 2014.
Under the UK’s complex arrangements to devolve some powers to Scotland, Wales and Northern Ireland, legislation generated in London to give effect to the vote to leave the EU may have to gain consent from the three devolved parliaments. Asked whether she would consider asking the Scottish parliament to block a motion of legislative consent, Sturgeon said: “Of course.”
“If the Scottish parliament was judging this on the basis of what’s right for Scotland, then the option of saying that we’re not going to vote for something that is against Scotland’s interest — of course that’s going to be on the table.”
However, a spokesman for Sturgeon later said that there was legal debate over whether a lack of Scottish consent would be enough to hold up the withdrawal, and that the Scottish government expected their London counterparts to say it was not needed.
Sturgeon said the Brexit vote was a game-changer that made it legitimate for Scotland to revisit the issue of independence. “The context and the circumstances have changed dramatically. The UK that Scotland voted to remain within in 2014 doesn’t exist anymore,” she said.

Source: Daily Herald
Scotland will do what it takes to stay in EU