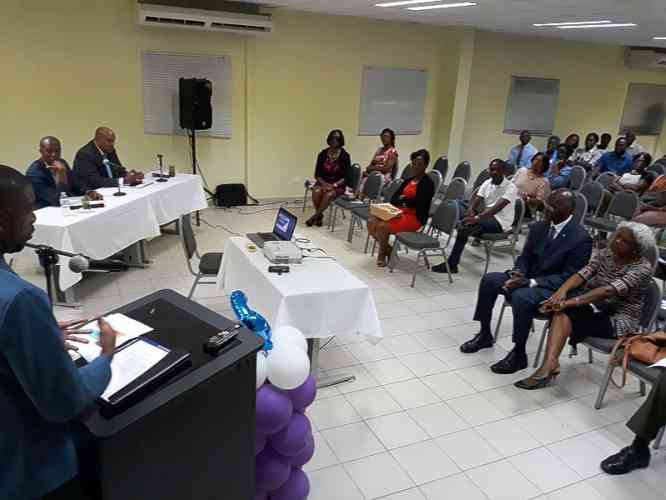 PHILIPSBURG–“Looking carefully at your policy and making it best work for you” was the clear message from insurance broker and St. Maarten Insurance Brokers Association (SIBA) President Neil Henderson at the sixteenth annual Lionel Bernard Scott Memorial Lecture at University of St. Martin (USM) this past Sunday.

Governor of St. Maarten Eugene Holiday and Minister of Education Jorien Wuite were present among the attendees. The lecture theme was “Hurricane insurance coverage; importance and accessibility.” Coordinators said this theme had been selected in keeping with current issues and in an effort to provide the people in St. Maarten with accurate information “in this very turbulent time as we try to move forward” post-Hurricane Irma.
“Why are the insurance companies taking advantage of hard-working people who pay their premiums annually and when a disaster hits, there are issues for people to get their claims honored?” one audience member asked.

Henderson answered by advising each policy holder to look at the fine print on each policy, but cautioned that each case is different.
Insurance expert Glenville Blake and Ministry of Tourism, Economic Affairs, Transport and Telecommunications (TEATT) Secretary-General Miguel de Weever joined Henderson in answering questions from audience members. The panel took turns and added their take on the insurance business in St. Maarten.

The Lionel Bernard Scott Memorial Lecture honours the memory of the late L.B. Scott, known as “Brother Bo,” a St. Maarten builder, businessman, politician and statesman who dedicated his life to the improvement of himself, his family, his people and the island.
In recognition of his many merits in the social and political fields he was distinguished in the order of Oranje-Nassau. A main street in the Cul de Sac area was also named after him and the Postal Services of the former Netherlands Antilles commemorated his birth date by issuing a special postage stamp in January 1974, eight years after his passing.
Scott revelled in ideas and in bringing them to fruition.