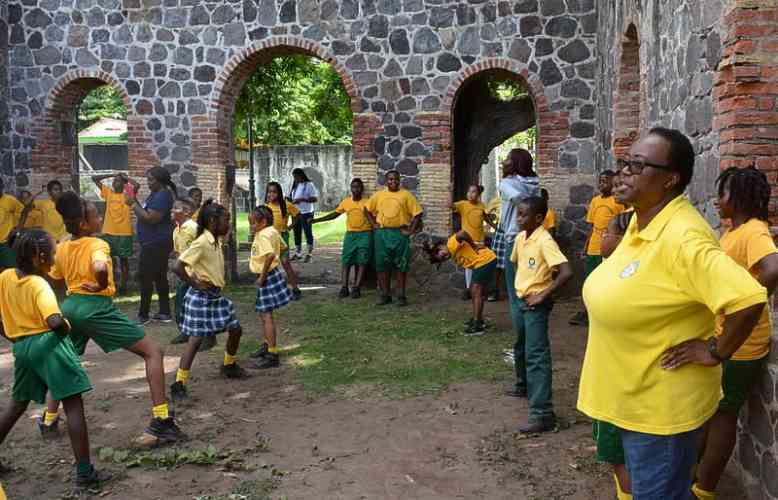 ST. EUSTATIUS–The Inter-American Division of Seventh-Day Adventist (SDA) Church has launched the “Live to Move” campaign to encourage all members – young and old – to improve their health.

The SDA School in St. Eustatius embraced the initiative and took groups five to eight out to some rhythmic gymnastics at an historical venue; the remains of the Dutch Reformed Church.

In the absence of a Zumba teacher, acting principal and teacher Cheryl Seaton rose to the occasion and literally jumped in to improvise movement and singing with the pupils.

One of the rousing songs chosen by Seaton to get her charges singing and swinging was the spiritual melody “Dem Bones, Dem Bones, Dem Dry Bones.” Inspired by the prophet Ezekiel, the lyrics were written with an underlying message for the resurrection of Israel as well as providing a sound method for teaching the various joints in the body.

The SDA School liaised with St. Eustatius Historical Foundation (SEHF) to use the location. “The choice of the SDA School for this location adds to a long tradition of its use by many different churches. Dutch Reformed ministers, Methodist preachers, Anglican pastors and even a Roman Catholic priest who later became Bishop of Willemstad have all held services within these walls,” said SEHF secretary Walter Hellebrand.