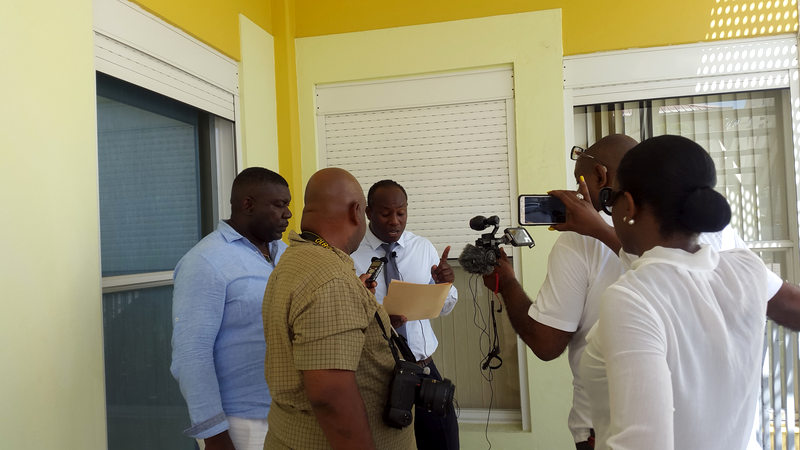 PHILIPSBURG–The awarding of colours to political parties without representation in Parliament should not be held up due to the court case filed by United St. Maarten Party (US Party), said St. Maarten Development Movement (SDM) leader Benjamin Ortega. Parties affected have to wait until September 2 to get their colours after the case is heard on Monday, August 29, at 3:00pm by the Court of First Instance.

Prior to SDM’S press conference, US Party issued a press statement saying: “Any party that somehow seeks to place the USP in a negative light for so-called ‘slowing’ the process in preparations for the September 26 Parliamentary elections, should note that the USP has invoked its democratic right under the existing laws to file a challenge petition against a decision by the Main Voting Bureau.”

Ortega said at his press conference held outside Government Administration Building on Tuesday, that SDM and other affected parties will only have 24 days leading up to the September 26 Parliamentary Elections to create awareness and market its image. He added that established parties, including the US Party, have their set colours and the newer parties should get an “equal opportunity” to also promote themselves.

Asked if SDM wants the Main Voting Bureau to go against the electoral regulations, Ortega said all that is being asked for is equal opportunity. He does not see the reason the case of US Party against the decision of the Bureau to exclude a candidate of the blue party should hamper the awarding of colours. That case is expected to be heard by the Court of First Instance this week.

Ortega said once elected to Parliament, he will put emphasis on revamping the electoral regulation to remove situations such as this holdup. “This is all part of electoral reform … but the focus is only on ship-jumping,” he said.

Main Voting Bureau Chairman Jason Rogers also announced earlier on Tuesday that the numbering of the lists and awarding of colours will take place on September 2.

On August 19, the Bureau held a public meeting – in accordance with Article 30 of the elections ordinance (Kiesverordening) – to review the validity of the lists of candidates and the maintenance of candidates on the lists.

As per Article 33, any voter can appeal a decision taken in that meeting, within two days after the sitting. That period ended on a Sunday and was automatically extended to Monday, August 22, per article 133. As such, Monday was the final day for the filing of an appeal.Based on Article 36, paragraph 1, the Bureau will hold a public meeting to number the lists of candidates, providing an appeal has not been filed.

Rogers has been informed by the Court that an appeal was filed by an eligible voter. As such, the public meeting regarding the numbering of the lists can only take place after the decision of the Court in First Instance as per article 36, paragraph 1 of the Kiesverordening. Article 35, Paragraph 1 of the ordinance states the judge will decide ultimately by the third day after the hearing set for August 29. September 2, the person who has submitted the list of candidates on Nomination Day, August 8, can indicate in writing the colour of preference for their list.

US Party’s number 15 candidate was removed by the Main Voting Bureau in its August 19 sitting, because the candidate’s name did not match the one submitted on Nomination Day.

US Party tried to swap the number 15 candidate Curtis Thomas with a new candidate Dennis Williams, a move that is not allowed under the Electoral Regulation.

Should the Court side with the unanimous decision of the Main Voting Bureau, US Party will go to polls short of a candidate and with a blank space at number 15.