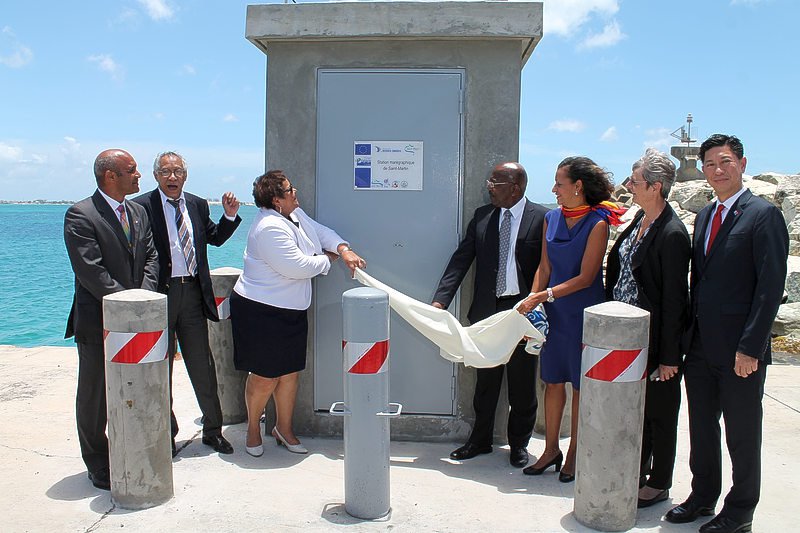 ~ Two monitoring stations under discussion for Dutch side ~
MARIGOT–The island’s first sea level monitoring station was inaugurated in the commercial port of Galis Bay on Thursday, at a brief ceremony attended by dignitaries from the island and the region.

The station is one of three projects co-financed by Europe via the INTERREG IV 2007-2013 programme, which is managed by the Region of Guadeloupe. A presentation of all three projects was made at a gathering in Hotel de la Collectivité earlier in the morning to which Dutch-side Prime Minister William Marlin and Health Minister Emil Lee attended, along with Head of Disaster Management Paul Martens and various department heads and technicians.
The instruments contained in a concrete housing monitor fluctuating sea levels; the data produced from a radar antenna above water and a pressure sounder in the water. The data contributes to the Tsunami alert system and can predict tides and climate change.
The station operates autonomously, powered by solar panels on the roof and has a permanent Global Positioning System (GPS) to ensure the station is stable from ground movement. Data is analysed by scientific partners.
European Development Funds FEDER donated 75,000 euros to the 100,000 euro cost, and the Collectivité added 25,000 euros. The presentation was made by the Collectivité’s Head of Major Risks Department Charlotte Terrac.
A station is due to be installed in St. Barths in a few months as part of the cooperation between St. Martin and St. Barths.
President Aline Hanson in her introduction noted it was fitting the presentations coincided with the May celebration of Europe. “The INTERREG programme represents hope and formidable opportunities for St. Martin,” she said. “We must catch up with infrastructure delays accumulated over the past 20 years. In this context, we have progressed since 2012 and seized the opportunities.
“INTERREG is precious to us as it helps us to develop inter-regional partnerships that lead to better management of our territories. Historically our islands have always enjoyed exchanges, either in commerce or employment, and I rejoice that cooperation is at the heart of our public policies.”
Hanson disclosed St. Martin will be present at the Association of Caribbean States (ACS) summit in Cuba in June, where the territory will be officially integrated into the ACS.
Prime Minister Marlin, in his address, noted inauguration of the station in Galis Bay was “an important step in closing existing gaps in the regional sea level station network.
“In fact, Philipsburg is quite jealous of Marigot in this respect by getting ahead of us, but I can tell you that our technocrats at the Office of Disaster Management and Ministry of VROMI are in discussion with the Port of St. Maarten to have two sea level monitoring stations, one at the port in Pointe Blanche and one at the Simpson Bay Bridge channel,” he disclosed. “Our islands lack historical data in many fields so in doing this another gap will be closed.”
He added a joint dossier is also being developed to install a new weather radar to serve the island as well as neighbouring islands.
Also congratulating the Collectivité on the projects were Second Vice President of the Regional Council in Guadeloupe Marie-Luce Penchard, and Territorial Councillor Jocelyn Ho-Tin-Noe from French Guiana.
The two other INTERREG projects currently in progress are the Health Observatory and the Belle Plaine flooding prevention project, both of which involve partnerships with the Dutch side.
The Health Observatory was created as a cooperation project between the Collectivité, Louis-Constant Fleming Hospital and the Government of St. Maarten. It received a subvention from FEDER under the INTERREG programme of 578,000 euros, about 75 per cent of the total cost of 771,000 euros.
Under its slogan “How healthy is St. Martin/St. Maarten?” the observatory is compiling data on chronic diseases, diabetes, obesity etc., and the lifestyles of citizens through interviews with the population to ultimately offer better health care.
In his presentation, Dr. Louis Jeffry noted 1,800 persons were interviewed in 2015; 70-80 interviewers were originally hired for the project and a partnership was formed with the University of the Virgin Islands and the University of St. Martin for logistical assistance. “We are satisfied with the results and now analysing the data,” he said.
The Belle Plaine project to eliminate the flooding risks to French Quarter and Belvedere has seen the feasibility studies completed at a cost of 1.4 million euros. FEDER has contributed 1M 117,500 euros, 75 per cent of the total 1M, 490,000 euro cost.
Other members of the Dutch-side delegation attending the presentation were Marc Arnold and Policy Advisor Olivia Lake of the Department of Interior and Kingdom Relations, Khalilah Peters from the Department of Foreign Relations, and Policy Advisor for VROMI Mark Williams.