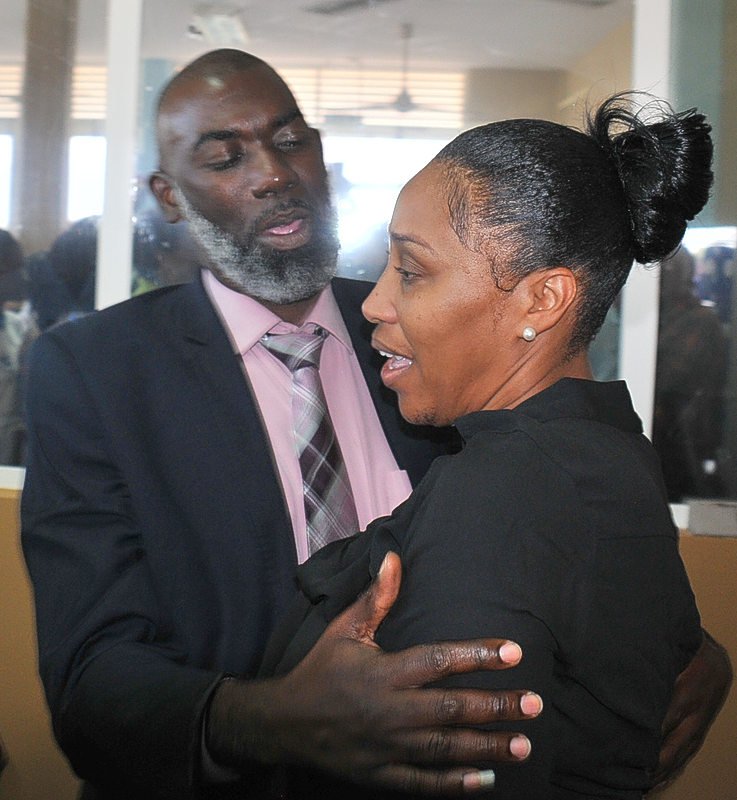 Parliament President Gilmar “Pik” Pisas welcomes back to Parliament his MFK-fraction colleague Jacinta Constancia upon her return following the incident in which she hit and injured MAN-parliamentarian Giselle McWilliam.

These motions re-emphasise the previous no-confidence motions against members of the outgoing Koeiman Cabinet already passed earlier. According to the now proposed coalition headed by former Prime Minister Gerrit Schotte (MFK), these ministers exhibit destructive behaviour and a “wrong and strong” attitude, which contributes to policies that are not in the general interest.

The MFK-leader claimed PAR is selling all the government-owned companies under the guise of strategic partnerships. “There is a policy being implemented in record time to sell all of our public enterprises to Dutch firms. This is done without any form of orientation of who will pay more or if that partnership is actually for the well-being of the island,” said Schotte.

As an example, he cited the Marriott Hotel that was closed for refurbishment after its sale in December, but also the Curaçao Dry Dock CDM, which has a new strategic partner in shipping company Damen of the Netherlands. “These decisions are being taken while the outgoing government no longer enjoys majority support,” he added.

Meanwhile, the caretaker Koeiman Cabinet has no intention of withdrawing its national decree to dissolve Parliament and call early elections on April 28, as demanded by Monday evening in another motion of the proposed MFK/KdNT/PS/MP/Braam/Dannawi coalition. The outgoing government insists that voters must not be robbed of the opportunity to speak out about all what has occurred since they last went to the polls on October 5.

In case of refusal the new majority wants the Kingdom Council of Ministers to suspend and annul the decree. However, a spokesperson of Dutch Home Affairs and Kingdom Relations Minister Ronald Plasterk said that while they were following political developments in Willemstad, there was no official reaction yet to the motion.

A majority of the Second Chamber of Parliament in The Hague favours continuing the early election, reiterated VVD-fraction member Andre Bosman. “According to me there have been so many shifts that people don’t recognise themselves at all anymore in the parties they voted for last year,” he argued.