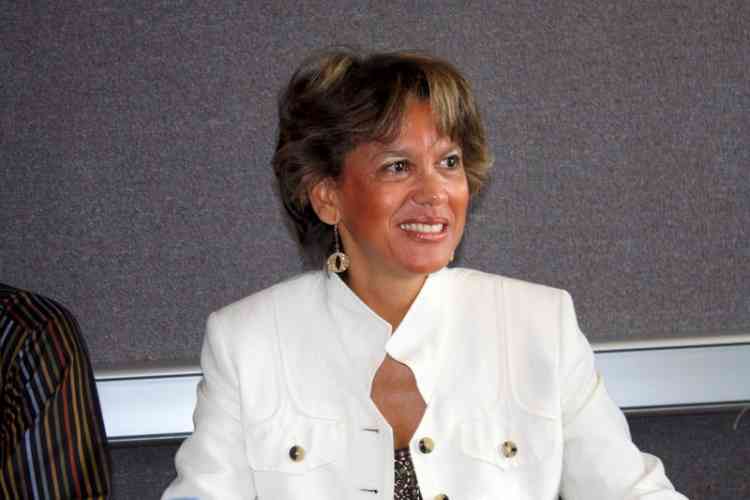 MARIGOT–The mixed capital company SEMSAMAR, one of the main landlords responsible for the social housing construction in St. Martin, issued a robust response to accusations levelled at it by President Emmanuel Macron during the press conference on Sunday. It noted that no employees had been invited to meet the presidential team.

“As the principal landlord providing social housing for 1,085 families, SEMSAMAR was accused during the President’s visit to French Quarter of irresponsibility and illegal practices,” the company said in its release. “However, the State services that accompanied the President were regularly and fully informed of the progress of each stage of the work and the financing.

“First of all, the President of the Republic indicated that: ‘The State has released a credit of six million euros at the disposal of social landlords on condition that these landlords do not pay dividends to their shareholders for three years.’ These credits have not been paid due to the agreement of one of the landlords whose housing was visited.

“It is important to point out that it was at SEMSAMAR’s request that the State released a credit of six million euros for social landlords from the Emergency Housing Fund. This request was made by SEMSAMAR the day after Hurricane Irma passed. It required the mobilisation of other social landlords and it was supported by overseas Parliamentarians. The credits released by the State for the rehabilitation of social housing are included in the aid granted to the Collectivité of St. Martin.

“The Préfet for the reconstruction of St. Martin clearly announced that no amount could be paid directly to social landlords. According to the texts: ‘decisions on the use and management of the Emergency Fund are taken jointly by the Minister for Housing and the Minister for the Budget.’

“SEMSAMAR was informed by the press of the publication of this decision. It was also informed of the drafting of an agreement to be signed by the Collectivité of St. Martin and the Préfet of Guadeloupe on the implementation of the aid granted.

“SEMSAMAR does not and has never had to give an agreement. In practice, it cannot oppose the payment of an aid for which it has fought in order to implement the rehabilitation of its social housing. The distribution of dividends, which is a condition for the payment of State aid, remains the decision of the shareholders of the various social landlords.

“The President of the Republic’s comments therefore demonstrate that he was not properly informed by the State services of the blockages in this case. This situation, as the President says, is indeed unacceptable.

“In recent years, SEMSAMAR’s management has constantly established, through controls and procedures, that it too had inherited a past situation. It has campaigned and organised financial transparency of its activities and a clear presentation of its objectives (Strategic Wealth Plan, Medium-Term Plan).

“It is challenging the legal proceedings initiated against the company in May 2012, which are still ongoing six years later and which have led to it being convicted by many public policy officials. It recalls that one of the foundations of a democracy is an independent judiciary. In a state of law, judicial proceedings are the responsibility of the judiciary and not of political power.

“SEMSAMAR’s governance has been strengthened in recent years. It is centred around its Board of Directors, which meets regularly and formalises its decisions through written reports; its committees of directors (Strategic Committee, Commitment and Risk Committee, Compensation Committee), whose support roles are essential. The Banque des Territoires (CDC) and CEPAC actively participate in the various bodies implemented.

“The financial information system has been adapted to the SEM’s various and territorial activities and a management control system has been set up. A steering committee involving the Chief Executive Officer and all the departments is operational for the budgetary monitoring of operations.

“The decisions taken by the Board of Directors are supported by specific files that are fully communicated to the State services control, in accordance with the laws in force, in addition to the regular annual audits of the statutory auditors, the Federation of Local Public Enterprises (EPL) and the central services of the Caisse des Consignations (CDC).

“The President was concerned about the state of the housing he saw (yesterday) and considers that it is therefore necessary to ‘accelerate the work to meet the needs of the population.’ Spread over 19 residences located throughout the territory of St. Martin, SEMSAMAR’s social housing inventory proved to be most resilient during Hurricane Irma.

“As of August 31, 2018, SEMSAMAR already signed 675 public contracts for a total amount of 32.4 million euros as part of its improved rehabilitation operations. These contracts have been regularly awarded through tender committees involving the elected representatives of the Collectivité of St. Martin.

“The rehabilitation undertaken by SEMSAMAR is continuing at a normal pace for an operation of this scale, but it could have been accelerated without the following obstacles:

“- Presidential promise not kept: work could not start until June 2018, largely because of the heavy tendering procedures, despite the President of the Republic’s promises, to deal with the urgency of the situation of some tenants and the preparation for the hurricane season.

“- Insufficient State mobilisation: despite several presentations of the technical and financial files of the work to be carried out, alerts given on the conditions for carrying out this rehabilitation, financing proposals issued (emergency housing fund, tax exemption), SEMSAMAR is still waiting for a concrete mobilisation of State services.

“- Insufficient supply of materials. The need is enormous and suppliers have difficulty meeting the demand in terms of quantity and time, including from Guadeloupe.

“- Difficulty of supply. Maritime transport is reaching its limit in terms of quantity as well as in terms of unloading and transport capacity. SEMSAMAR is in contact with the Port of St. Martin to set up the avenues for improvement.

“- Maintenance and care of the equipment. The materials are extremely solicited and their availability becomes problematic.

“The President asked all lessors to carry out the work by December 31, 2018 which is in line with the planning of Phase 1 of the work organised by SEMSAMAR, which concerns the roofing and external joinery of the dwellings. It should be noted that this rehabilitation depends on many constraints beyond the sole control of SEMSAMAR. Indeed, the work is carried out in an occupied site.

“With regard to the rents received by SEMSAMAR, the President’s advisers could have reminded him that the law states that as long as a tenant has not terminated his lease, he is required to pay his rent to his landlord; and that no flexibility has been provided on this point to resolve the situation in St. Martin.

“Since then, SEMSAMAR was forced to act. In September 2017, SEMSAMAR took over, on its own account, the rents of its tenants in St. Martin. No tenant has paid rent. As from October 2017, this rent waiver was adapted according to the degree of inhabitability of the housing.

“In St. Martin, as elsewhere in France, social rents are regulated by the State. The amount of money left to be paid by the tenant depends on his or her income and the housing assistance granted. As such, SEMSAMAR applies the texts like any social landlord in France and, like its colleagues in France, is subject to President Emmanuel Macron’s criticism of the management of social housing.

“Since the end of 2017, social landlords have been in the crosshairs of the government, which has reduced housing subsidies. Until then, the West Indies-Guiana donors had seemed to escape this charge against the social landlords. It would thus seem that SEMSAMAR is the first landlord in the French West Indies to suffer the disenchantment of the President of the Republic.

“However, State services cannot ignore the fact that SEMSAMAR first assumed, without State assistance, the immediate emergency phase in September 2017. After Hurricane Irma, SEMSAMAR moved out of its role as a social donor and temporarily transformed itself into a non- governmental organisation (NGO).

“It organised an air and sea bridge to assist the population, particularly its tenants and those of the island’s other landlords. SEMSAMAR then managed, without State funding, the security phase of its housing to protect families while waiting for the final work to be done.

“In addition, in order to actively involve young St. Martiners in the reconstruction of their island, SEMSAMAR has included a social integration clause in the contracts related to the rehabilitation of its park. In this respect, 54,500 hours (value: 1.3 million euros) have been reserved for work in integration.  This represents a potential of 300 jobs to be recruited in the long term.

“As a reminder, the vocation of SEMSAMAR is to intervene in missions of general interest (in particular social housing), economic development and planning; to be an operational tool, a force for proposals and action at the service of local authorities in the French West Indies and French Guiana.

“Having understood that the President was not sufficiently informed of the reality of the reconstruction for which it is responsible in St. Martin it is open to discussion with the President of the Republic in order to enter into a meaningful partnership with its services.”