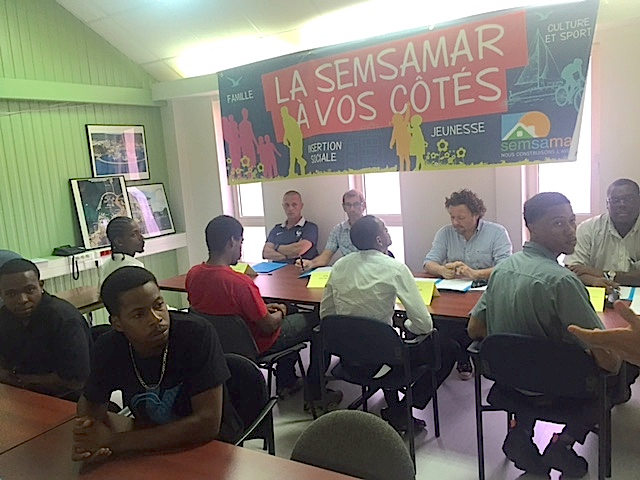 MARIGOT–Fifteen young hopefuls were selected for Semsamar’s first job dating session on Monday, as part of the mixed capital company’s efforts to get young people employed.

The 15 were short listed from 40 possible candidates identified by the Employment Office (Pole Emploi) last week, who were then screened and interviewed by Semsamar management.

The job dating session permitted the youngsters to meet representatives from various construction companies, hoping to impress their potential employers.

Semsamar noted in its release that “quite a few” of the candidates will be hired in the coming days thanks to the job dating.

The new initiative of job dating is part of the “SEM Ta Route” operation started by Semsamar last year.

“SEM ta Route” is an insertion initiative aimed to give the youth from the social housing projects work experience with companies, and is complementary to the work of the Semsamar Solidarity Foundation on behalf of families in the community.

Several hundred young people benefited from “SEM Ta Route” in 2015 and 2016, and at least a dozen have found full time jobs.

“SEM Ta Route is a real opportunity,” said Enel Belancourt (21) one of the successful young people. “Since 2012 I have been unemployed, but thanks to SEM Ta Route I was able to find my first job. I finished my six-month contract last Friday, and I have already received two job offers. I am very happy.”