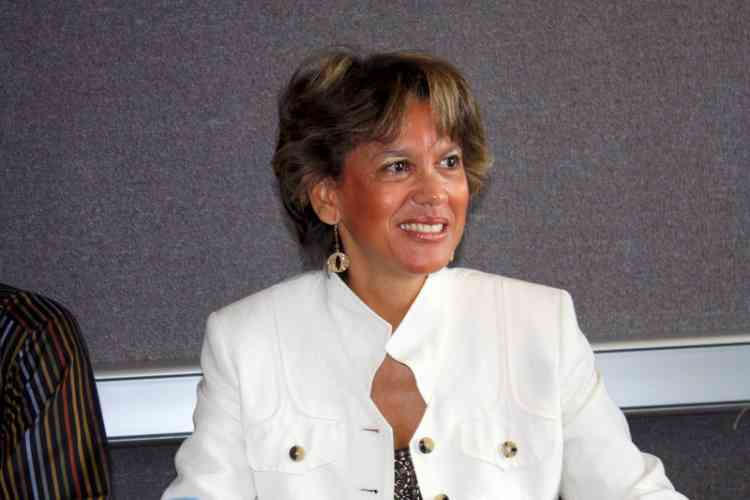 MARIGOT–Rumours circulating in the past few days over President of the French Republic Emmanuel Macron wanting dismissal of “the head” of SEMSAMAR, Director General Marie-Paule Bélénus Romana, and dismantling of the company have set social networks alight and prompted angry reactions from Parliamentarians in Paris and Guadeloupe who widely condemned Macron.

The allegations stemmed from an article published by Guadeloupe-based Caraibe Creole News (CCN). President Macron, on September 30, the last day of his official visit to St. Martin, was highly critical of the company’s performance in reconstruction, even suggesting corruption and illegal practices. The mixed capital company, which is 51 per owned by the Collectivité of St. Martin, was forced into issuing a lengthy defence of its operations.

SEMSAMAR President Yawo Nyuiadzi refuted the allegations when questioned by French-side media. Nevertheless, a board meeting is to be held on Friday where the board will discuss how to respond to the allegations. Nyuiadzi said the Director-General’s “dismissal” was not even an item on the agenda, and slammed rumours that caused unnecessary panic among the company’s employees.

Opposition party Movement for Justice and Prosperity (MJP) has called out President Gibbs to tell the population the truth.

“The article circulating on social media in St. Martin and Guadeloupe suggested Gibbs had a private meeting with President Macron where he allegedly said he would support Gibbs with more funds for reconstruction in exchange for revoking the Director General’s position,” said MJP President Louis Mussington.

“The President of the Collectivité has an obligation to tell the people about what took place in that private meeting and if it is a true an agreement was struck with Macron. Gibbs is the only one who can clarify this matter.

“It is unacceptable for the President of the French Republic to dictate and meddle in the affairs of a company where the Collectivité is a majority shareholder. It’s unacceptable to try and control the management of any company in St. Martin, for that matter. This is some form of neo-colonialism which must be condemned.

“There must be a very valid reason to remove a high-ranking manager of a company. It can’t be just because the President wants her out. … That’s unfair, illegal and unconstitutional. If there are charges against the lady, then let the legal system do its work.”

Mussington said it was somewhat bizarre that Macron, during the tour of French Quarter on the Saturday, had humiliated Gibbs in front of the local population as if he were a naughty schoolboy who had stolen something, but then during the press conference on Sunday did a complete U-turn, talking about him in glowing terms.

“It seems something happened in that private meeting and Gibbs was pressured into behaving the way he is behaving,” Mussington said.

“The President of the Republic wounded the pride and dignity not only of Gibbs but the St. Martin people when he talked about widespread corruption. He tarnished our image and it is regrettable that Gibbs did not react to the President in a more courageous and responsible manner, particularly as there are promises that have not been filled on the part of the State; for example, the compensation for the transfer of competences, the 50 million euros that is owed to Caisse d’Allocation Familiale (CAF), etcetera.”

President Gibbs could not be reached by phone last night to reply to Louis Mussington and the SEMSAMAR rumours.