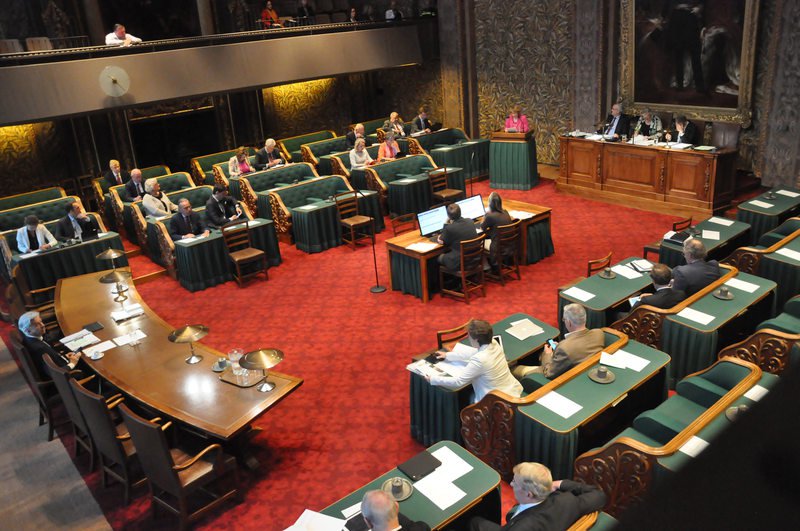 THE HAGUE–Eleven of the twelve parties represented in the First Chamber of the Dutch Parliament, on Tuesday, voted in favour of a motion to set a social minimum in Bonaire, St. Eustatius and Saba, that is based on the amount that a person needs to live a decent life.

The motion, which requested the Dutch Government to determine a social minimum based on standard amounts for the basic needs for the three islands, was supported by all parties except for the Party for Freedom PVV when it came to voting during the plenary meeting on Tuesday.
The liberal democratic VVD party, the Christian Democratic Party CDA, the Labour Party PvdA, the Socialist Party (SP), the Democratic Party D66, the ChristianUnion, the Christian reformed party SGP, the Party for Animals PvdD, the Independent Senate Party OSF and the senior citizens party 50PLUS had all co-signed the motion submitted by Senator Ruard Ganzevoort of the green left party GroenLinks, during a debate on the evaluation of the new constitutional relations last week Tuesday.
The motion referred to the right of a decent standard of living stated in the Universal Human Rights Declaration; the responsibility of the Dutch Government for the livelihood of people and the equal treatment as stated in Dutch Constitution; the possibility of deviation of rules and regulations for the Caribbean Netherlands as stated in the Kingdom Charter, and the fact that the Netherlands does have a social minimum with standard amounts for the basic needs.
According to the motion, the lack of setting a social minimum that is based on the basic needs creates an “unnecessary and non-convincing argued differentiation” between the Netherlands and Bonaire, St. Eustatius and Saba. The motion also stated that this hampered an objective discussion regarding a poverty policy, and that the duty of the Dutch Government to care for its citizens was impeded. Dutch Minister of Home Affairs and Kingdom Relations Ronald Plasterk had advised against the motion, stating that it could impede the economic development of the islands.
During the debate with Plasterk last week Tuesday, almost all parties in the Senate voiced criticism about the lack of a social minimum for the Caribbean Netherlands that was based on a minimum level of subsistence, and the plans of the Dutch Government to establish a social minimum that was linked to the economic development of the islands.
Now that the motion of Senator Ganzevoort has been adopted, it is up to the Dutch Government to take action. The Senate’s Permanent Committee for Kingdom Relations will file a request to the Dutch Government to enlighten the committee how it intends to give follow-up to the motion.
Three other motions submitted during last week’s debate were adopted on Tuesday: a motion about the evaluation of the Charter; a motion about the function of the National Government Representative, and a motion regarding children’s rights.
In the motion about the evaluation of the Charter, submitted by D66 Senator Thom de Graaf, the Dutch Government is requested to promote the evaluation and modernisation of the Charter and to consult with the other partners in the Kingdom. The PvdA and PVV voted against the motion. Minister Plasterk had advised against the motion saying that a revision of the Charter was not opportune.
The motion regarding the National Government Representative (“Rijksvertegenwoordiger”), an initiative of CDA Senator Sophie van Bijsterveld and unanimously adopted, requested the Dutch Government to change the name of this representative to Commissioner Caribbean Netherlands (“Commissaris Caribisch Nederland”) when the general law regulating the islands, the WolBES, is adapted. The motion also requested to adapt the job description of this representative in order to clarify the two-sidedness of this function.
The children’s rights motion, submitted by ChristianUnion Senator Peter Ester, requested the Dutch Government to monitor the improvements in this area and to report to the Senate. The motion mentioned the possible need for a more intense action programme to improve children’s rights in the Dutch Caribbean. Only the PVV voted against this motion.
Senator Jan Nagel of 50PLUS withdrew his motion which requested the Dutch Government to install an independent committee to investigate the missing pension premiums of several hundred civil servants and teaching personnel in the Caribbean Netherlands prior to October 10, 2010. Nagel stated that the motion was no longer necessary because an investigation was already taking place with results expected shortly.