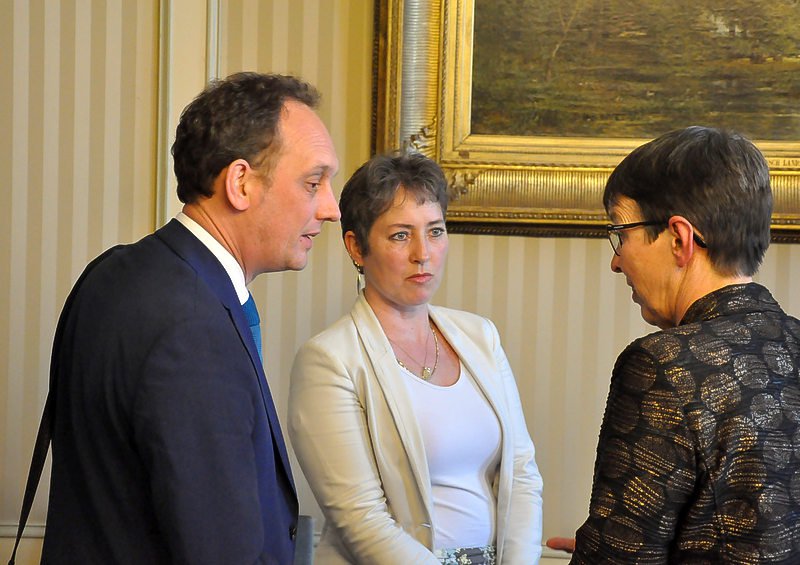 THE HAGUE–The Permanent Committee for Kingdom Relations KOREL of the First Chamber of the Dutch Parliament, on Tuesday, urged State Secretary Jetta Klijnsma of Social Affairs and Labour to hurry up with the research to arrive at a social minimum for Bonaire, St. Eustatius and Saba.

“The State Secretary has not done what we asked her to do in an adopted motion,” said Senator Meta Meijer of the Socialist Party (SP), who accused Klijnsma of lacking the willingness. “I am totally not satisfied. We specifically asked for this step in June last year. We again discussed this matter with the State Secretary in December. We were promised a concrete plan by March 1. It is now the end of March and still nothing. People are hungry,” said Meijer.

The KOREL members were content with Klijnsma’s moves to increase the social welfare on the islands and to make funds available for the eradication of poverty. However, they were critical about the lack of speed from the side of the State Secretary to initiate an objective research to determine the cost of living (the so-called “bare essentials”) and to establish a social minimum based on these figures. Speed was demanded, whether the current government has a lame duck status or not.

Early March, Klijnsma promised the Senate that the parameters of the research would be ready in the first half of 2017 and that the actual research for a social minimum should be completed by 2018. This timeframe was not to the satisfaction of the KOREL Committee, which called the State Secretary to a meeting on Tuesday.

“We would like to hear from the State Secretary what and how you will go about this matter, and when we can expect concrete results,” said Senator Frank van Kappen of the liberal democratic VVD party. Senator Thom de Graaf of the Democratic Party D66 urged Klijnsma to present tangible results of the research this year.

“The important question is why we have to wait so long on the results, until 2018. This doesn’t have to take nine months. The islands also want quick results,” said KOREL Chairman Ruard Ganzevoort of the green left party GroenLinks. “What is the problem and why do we have to wait so long,” asked Senator Sophie van Bijsterveld of the Christian Democratic Party CDA.

Senator Mohamed Sini of the Labour Party PvdA asked the State Secretary whether she could advance the research. “Why can’t this research be ready before the end of 2017,” Sini asked. Senator Henk ten Hoeve of the Independent Senate Party OSF asked Klijnsma to urge the next Dutch Government to make this a priority.

The members expressed concerns about the deep poverty on the three islands. “Poverty is a real problem, everyone acknowledges that. We should also acknowledge that the social allowances are simply too low,” said Ten Hoeve. “We are deeply concerned about the terrible poverty that exists on the islands,” said Van Kappen.

Meijer said that the level of poverty was “unacceptable” for the SP and required urgent measures. Establishing a social minimum is a vital step in the process to eradicate poverty, said Meijer, who added that the monthly US $15 increase of the social welfare could only buy people a few basic items. She warned that if the State Secretary did not solve this matter, she would “gladly” continue discussions in a plenary meeting.

Klijnsma said that she heard the “heartfelt cries” of the Senate, but that she needed time to properly formulate the parameters for the research, to find the most suitable research bureau with expertise in the region, and to determine a realistic timeframe.

The State Secretary promised to try to have the research report ready before January 1, 2018, and pledged to update the Senate on the details of the research status before June 1, 2017. She did warn that establishing a social minimum would not automatically lead to higher social welfare because the local circumstances and the informal economy always had to be taken into account.