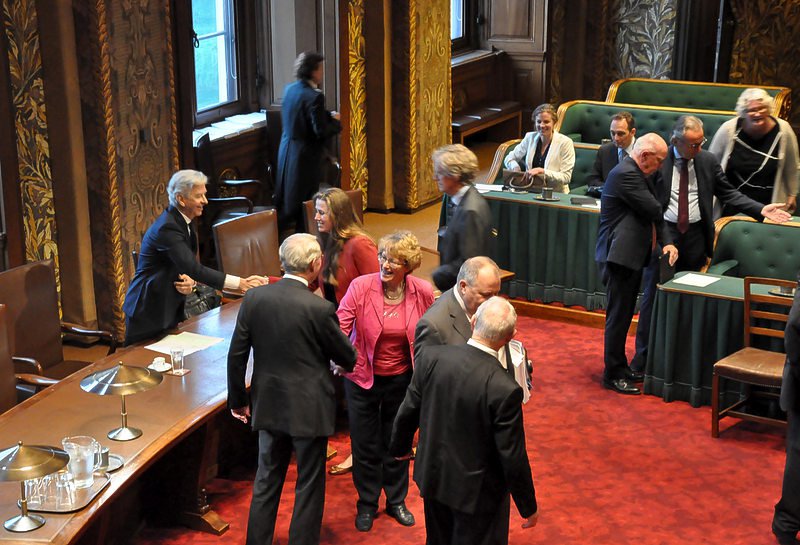 THE HAGUE–The First Chamber of the Dutch Parliament during a debate on Tuesday tried to commit Dutch Minister of Home Affairs and Kingdom Relations Ronald Plasterk to a promise to set a social minimum that covered the basic needs of the people of Bonaire, St. Eustatius and Saba so that they could make ends meet.

However, the Minister kept his position that the social minimum would be linked to the economic development of the islands and subsequently referred to his colleague of Social Affairs and Labour Jetta Klijnsma whom he said would draft a plan and present the details to the Dutch Parliament later this year.

All 12 parties represented in the Senate, without exception, brought up one of the most painful point in the relations between the three islands and The Hague: an “acceptable” level of services provided by government, the associated level of the minimum wage, social welfare and the fact that many families have trouble paying their bills and live a decent life.

The parties concurred that the minimum wage and the social welfare level were too low and that the promise of the Dutch Government to upgrade these gradually, based on the economic carrying capacity of the islands was “too vague.”

The Minister was reminded during an eight-hour debate on the constitutional evaluation of the relations within the Kingdom after October 10, 2010, of the fact that the current minimum wage and social welfare (“onderstand” and the AOV pension) level were too low for many in society to survive on. This especially affected the most vulnerable groups, such as the elderly, those living off social welfare “onderstand”, single parents and by extension, their children.

These low wages and social welfare resulted in poverty, a widespread problem in the Caribbean Netherlands which has only worsened since the islands became Dutch public entities in October 2010 due to steeply risen prices and an increased tax burden.

The Senators demanded clear answers as to when this issue would be tackled. “When can all people on the islands buy food at the end of the month? We don’t want vague answers. We want concrete answers from the Minister, we want a forceful Minister and we want a timeframe,” said Senator Meta Meijer of the Socialist Party (SP).

Plasterk said that he was unable to give details and a timeframe because this was a responsibility of State Secretary Klijnsma. He stressed that for the first time, the State Secretary of Social Affairs and Labour would set the social minimum. “That is a major step forward. Earlier governments refused to do this.”

Senator Ruard Ganzevoort of the green left party GroenLinks queried whether the social minimum to be set by the government would be sufficient for people to live from. “Why does this government choose a different systematic for the Caribbean Netherlands than it does for the Netherlands? Why is this government not willing to determine what people need to survive on?”

Ganzevoort and Senator Frank van Kappen of the liberal democratic VVD party wondered how long people on social welfare would have to live below the poverty line because the government chose to gradually increase the social welfare, “onderstand” to the social minimum.

Ganzevoort presented a motion towards the end of Tuesday’s debate, supported by 11 of the 12 parties in the Senate. In the motion it was stated that everyone had a right to a decent standard of living and that the Dutch government had the obligation to look after the wellbeing of the people, also in the Caribbean Netherlands. The motion asked the government to set a social minimum with the subsistence minimum as a point of reference.

Minister Plasterk strongly advised against the motion. He said that linking the social minimum to the subsistence minimum could have adverse consequences for the islands’ small economies. The Minister maintained that it was important to keep the local circumstances in mind. Ganzevoort countered that the local circumstances were poverty and people having trouble to make ends meet. He said that the Senate was merely asking to objectify the bare necessities to have a decent life for the people.

“Apparently the Minister doesn’t want to link the social minimum in a logical manner to the cost of living on the islands. Poverty is a great disruption,” said Senator Christine Teunissen of the Party for Animals, who asked why the same system as in the Netherlands was not applied to the islands.

Senator Peter Ester of the ChristianUnion said that the islands were waiting for a point of reference and the setting of the norms where it came to the social minimum. He said that absence of this norm increased distrust and impeded cooperation and development. “If we don’t act quickly, things will remain turbulent for a long time,” said Ester, who implored on the Minister to take his responsibility to improve the social facilities.

Senator Jan Nagel of the 50PLUS said his party was irked by the “lacking of any social emotion” of the Dutch Government. He said the decision of the government to use of the minimum wage as point of reference to set social minimum, as a result of which the social welfare, “onderstand” and AOV would remain in balance with the minimum wage, “literally the end of the story for people living in unacceptable poverty.”

Senator Ruud Vreeman of the Labour Party PvdA said it was important to establish the social minimum, especially for those people that cannot make ends meet on the current minimum wage and the level of social welfare. He said the method that the Dutch Government applied was “incorrect.”

“I don’t understand why this is so hard. Why not just apply the Dutch level? It is clear that the ‘onderstand’ on the islands is simply too low. It is evident that the social minimum must go up,” said Senator Thom de Graaf of the Democratic Party D66 who referred to the similar findings of the Caribbean Netherlands Evaluation Committee headed by former Minister Liesbeth Spies.

Senator Henk ten Hoeve of the independent senate party OSF doubted whether a higher minimum wage would lead to an uncontrollable influx of foreign employees. “Work permits are required, naturalisation is only possible after five years and the islands are of a clear, small scale.”