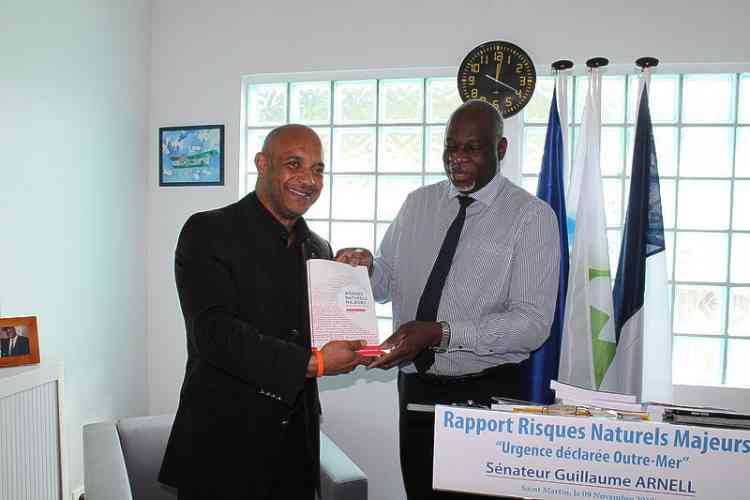 MARIGOT–Senator Guillaume Arnell officially presented President of the Collectivité Daniel Gibbs on Friday with a report on Major Natural Risks in the French overseas territories that was compiled by a senatorial delegation in the aftermath of Hurricane Irma and published in July 2018.

Arnell was rapporteur and coordinator of the project working with two other rapporteurs, Senator Mathieu Darnaud of Ardèche and Senator Victoire Jasmin of Guadeloupe.

The 225-page booklet addresses the situations in 11 territories based on 110 hours of meetings and visits, and offers some 60 recommendations on how to prepare in advance and manage the risks.

“The objective of the exercise was not to put blame on Government over its failings as the Senate wanted to do, or point fingers for what was not done or not done fast enough, because that would not have changed the magnitude of the hurricane or the scale of the damage caused,” Arnell explained. “We felt it was more important to learn from the experience, to see what can be improved, what can be updated, what can be put in place that was not there before.

“We extended the exercise to all the overseas territories and departments. We didn’t just focus on hurricanes, but also earthquakes, tsunamis, floods, etc. We realised that all of the territories are subject to one or all of those risks, so, starting from Hurricane Irma, it broadened our view on how to approach the study.

“We couldn’t visit all the territories, so we focused on the Antilles – St. Martin, St. Barths, Guadeloupe, Martinique – and held video conferencing interviews with the other territories. French Guiana was included too. Audits were also done with various institutions, and Meteo France. It was decided to produce an informative report rather than an investigation.

“We also met with the press because they had an important role to play in the aftermath of a disaster.  It’s important to note that the colour-coded warnings are different depending on the territory and the type of risk, so there should be harmonisation of the colours. That was one of the recommendations mentioned.”

Arnell said the Central Government and by extension the Collectivité of St. Martin are responsible for the protection of the people; therefore, the report will be a useful tool to prepare accordingly for future climatic events.

“The Senate can make law proposals and force government to do what is necessary. But we hope that every level of responsibility will be met and that necessary corrections will be put in place to better inform the people, to be better prepared, and not to be caught off-guard,” Arnell concluded.