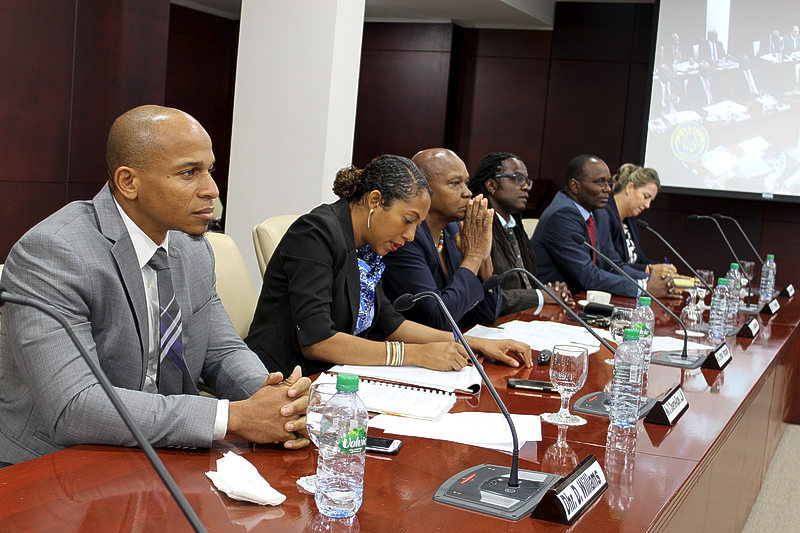 PHILIPSBURG–The Social Economic Council SER delivered a presentation about its functions and role in society and fielded questions from Members of Parliament (MPs) during a meeting of the Central Committee of Parliament on Wednesday.

SER Chairperson Oldine Bryson-Pantophlet told MPs that a properly functioning SER is of essential importance for a society with many socio-economic issues.

Bryson-Pantophlet said while the relationship with government is good, there is room for improvement. “Sometimes it takes a long time to get information that we seek from the various departments and sometimes it doesn’t.”

The aim of the SER, she noted, is to promote consensus by creating a platform for social partners to discuss and reach agreement on socio-economic issues before they are turned into policy or law. This enables the SER to advise on issues that affect many citizens, such as work, income levels, social security, taxes, professional education, and the environment.

SER’s sole task is to provide government with solicited and unsolicited advice.

The scope of the SER comprises the entire field of social economic development.

A topic is eligible for advice by the SER if it belongs to one of the four pillars of development, and has a significant impact on economic growth (investment climate) and/or quality of life (well-being of the individual, families or communities), Bryson-Pantophlet said.

Advice will be focused on the impact of a certain policy on socio-economic development. Advice will always take into account the impact on both economic growth and on quality of life, since both areas influence the other.

The SER board consists of three representatives of employers’ organisation, three from employees’ organisations and three independent experts. Each member has a substitute member. The chairperson and vice-chair are chosen from amongst the members of the Council. Members of the Council and their substitutes resign every three years after which they can be re-appointed. The members do not represent their organisations, but are appointed on a personal title.

The current independent SER members are Chairperson Bryson-Pantophlet, Vice Chairman Dwight Williams and Francio Guadeloupe. The independent members are appointed by national decree on recommendation of the Minister of General Affairs.

All SER advisory reports issued since its establishment can be downloaded free of charge from its website www.sersxm.org.