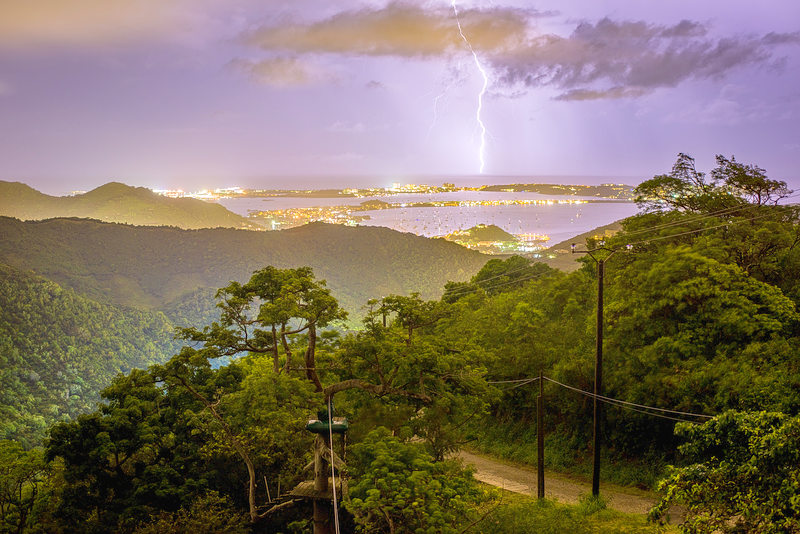 PHILIPSBURG–St. Maarten residents went to sleep to the “music” of jarring lightning and crashing thunder on Sunday night and awoke to heavy rains, severely flooded streets and yards and rockslides, all caused by a tropical wave descending on the local area.

Dutch side residents had no forewarning from Government about the coming tropical wave that came on the cusp of the start of the hurricane season. This is unlike French side residents who were alerted about coming bad weather from earlier in the week and for whom a “Yellow Alert” was issued for St. Martin and St. Barths before the onslaught of the thunderstorms.

Coupling with no warning, Dutch side residents were left to wonder if school doors would remain shut and businesses would remain shuttered. The school question was answered by Education Minister Silveria Jacobs around 6:39am when she ordered all schools to remain closed.

The decision for businesses took much longer as residents watched water continue to rise in their yards and streets. Many parents agonised on social media about not knowing how to manage with their children unexpectedly at home and no word on decision for government offices and the private sector.

At 7:23am, the Fire Department requested motorists to remain off roads due to heavy street flooding.

Several businesses and offices opted to not wait for any official word from Government and took the decision to remain closed. Opting to not open were the Receiver’s Office, Civil Registry Department, the Public Service Centre and the Department of Labour and Social Affairs.

The offices of the Social and Health Insurance SZV, Women’s Health Services, United Telecommunications Services (UTS) and others stayed closed due to the inclement weather.

St. Maarten Banks Association informed the public that banks would open at 10:00am, but added a caveat that if the weather continued to deteriorate this decision would be readdressed. But, the rains subsequently stopped and business continued.

The long awaited notice from government came at 9:09am. It informed the public that its offices were opened, excepted for those for which closure notices were issued.

“Business activity can continue as normal, but it is up to the discretion of the business owner/manager whether they would close their operations,” the notice issued via the Department of Communication stated.

Residents have voiced concerns about the general preparedness of the country for the hurricane season that officially starts on Thursday. The heavy rain caused both the Fresh and Great Salt Ponds to burst their banks run onto roads and yards.

The Department of Public Works had to rush in the heavy downpour and high gusts to open a channel between the Fresh Pond and Great Bay to relieve the flooding and prevent further water damage.