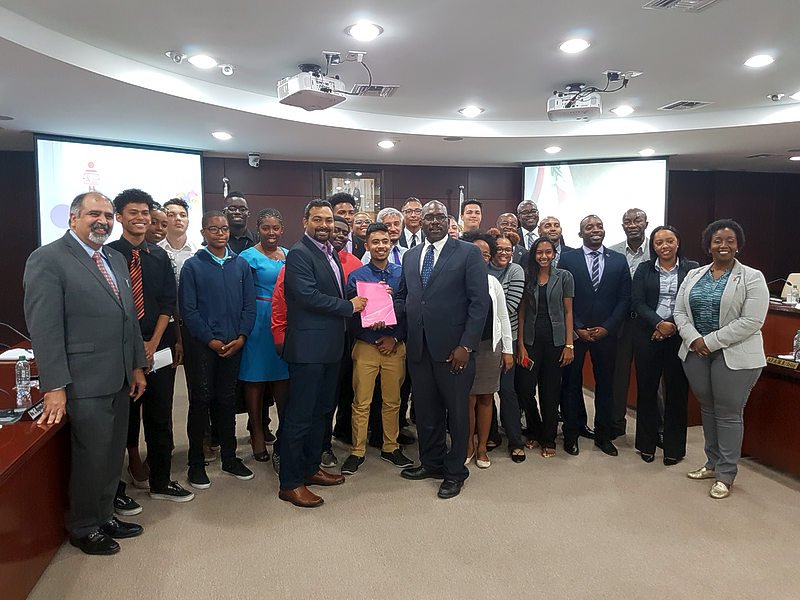 PHILIPSBURG–Members of St. Maarten AIDS Foundation Youth Wing urged lawmakers on Tuesday to look into several issues that affect sexual and reproductive health and rights of teenagers in a Central Committee meeting of Parliament.

The meeting centred on the finding of the foundation’s Youth Consultations 2016, which sought, among other issues, the regulation of termination of pregnancies, citing that though illegal on the Dutch side, such procedures are still carried out and can be obtained as easily as crossing the border to the French side where such has been legal since the 1970s.

This recommendation and others resulted from the 2016 Youth Consultation held in Anguilla in October 2016. The Youth Wing members were joined in the discussion by teens from Anguilla and the French side to exchange ideas and brainstorm about topics and situations that affect them.

Teens are well aware of the consequences of early sexual activities and the risk of unwanted pregnancies. They also told Members of Parliament there is a need for more information to be given in schools at an earlier age about life challenges and on sex education. They were clear that such information would not encourage more sexual activity, but would equip teens with information and knowledge to make good life choices.

Access to insurance by people living with chronic diseases such as HIV/AIDS, and the high cost of medication for this epidemic, were also raised with MPs in the Central Committee meeting. St. Maarten, as part of the Dutch Kingdom, is excluded from accessing generic medicines and must rely on expensive patented brands.

Anti-bullying programmes and the need for counsellors to be accessible to teens to talk with and advise teens struggling with, among other things, gender identity and sexuality, were highlighted by the youngsters.

They also outlined the need for parents to be more involved in talking with and guiding their children in the tough growing years of life.

The final report of the conference was presented to Deputy Chairman of Parliament Rodolphe Samuel by AIDS Foundation Executive Director and Youth Wing Coordinator Rajesh Chintaman after the meeting.

Chintaman also expounded on the recommendations from the consultation in the parliamentary session and told MPs his hope and that of the youngsters is for their recommendations to be acted on and one day soon be reflected in policies and programmes to better assist and equip them for life.

Following their presentations, the youngsters were engaged in a debate with MPs about the recommendations and on the topics they outlined.

The Youth Wing will make a similar presentation to the Council of Ministers on March 1.

A copy of the consultation report and a presentation has already been made to St. Maarten Development Foundation (SMDF) as the main funder of the AIDS Foundation’s youth programmes Real Talk and Girl Power. SMDF also sponsored the youth consultation.

The Youth Wing has also presented a copy of the final report to Representative of the Dutch Government in Philipsburg Chris Johnson, who has passed it on to Dutch Ministry of Health officials. The idea of holding the 2017 Youth Consultation in Saba or St. Eustatius is being explored.