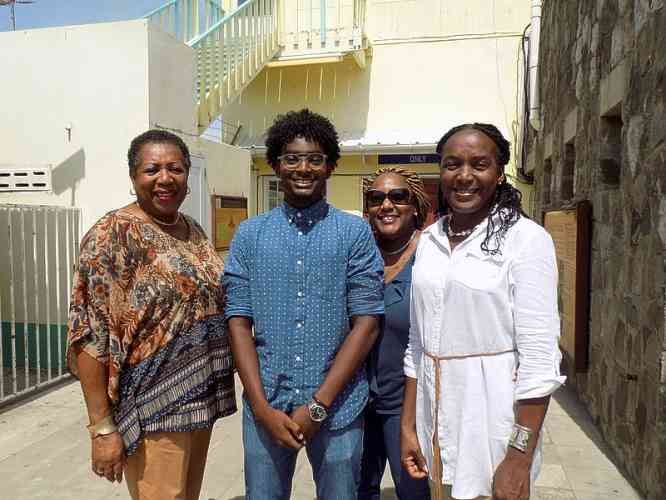 ST. EUSTATIUS–Shaquan Maharaj travelled with his chaperones to the Bahamas Tuesday morning to take part in the Tourism Youth Congress, which will be held October 3 to 5.

Maharaj’s chaperones are teacher Christina Timber-Glover of Expertise Center for Education (ECE), chairperson Leonora Sneek-Gibbs of the sponsor of this trip St. Eustatius Promotion of International Culture and Education (SPICE) Foundation and his mother Alsira Maharaj-Mitchell.

St. Eustatius Tourism Development Foundation, in collaboration with SPICE, is taking part in the Youth Tourism Congress, which, Sneek-Gibbs said, is an integral part of the Caribbean Tourism Organization’s (CTO’s) annual state of the tourism industry conference.

The Youth Congress is a regional activity involving students between the ages of 14 and 17 years old, who are nationals, citizens and residents from CTO member-countries.

The Congress is structured to mirror a CTO board of directors meeting and its main aim is to stimulate greater awareness of and excitement about tourism among young persons in the Caribbean by allowing them to research various facets of the tourism sector and share their ideas and visions with respect to the future of Caribbean tourism.

“As St. Eustatius is also a part of the CTO, we deemed it necessary that also our children be a part of it. For some years we have been taking part in the activities. Not regularly, but for the past two years we have taken part,” Sneek-Gibbs said.

Last year, Statia did not attend due to the Hurricanes Irma and Maria, which left the island battered and in shambles, but this year the participating foundations thought it would be a good idea to take part in CTO activities against.

“We hope that we will place in a competition. Even if we don’t, the experience alone will be great in having our student take part in the greater region of the Caribbean in these kinds of the debates. The experience opens the minds and it gives us insight,” Sneek-Gibbs said.

Timber-Glover said there were three topics to choose from; Developing smart and sustainable Caribbean countries; the Year of Wellness and Rejuvenation; and Virtual Reality and Tourism. Maharaj will be promoting the year of Wellness and Rejuvenation on Statia, she said. He will be speaking about the serene, calm and tranquillity of Statia in comparison with the other islands that have big luxurious hotels and spas.