Home Local News Share of solar power on the rise in Statia, Saba 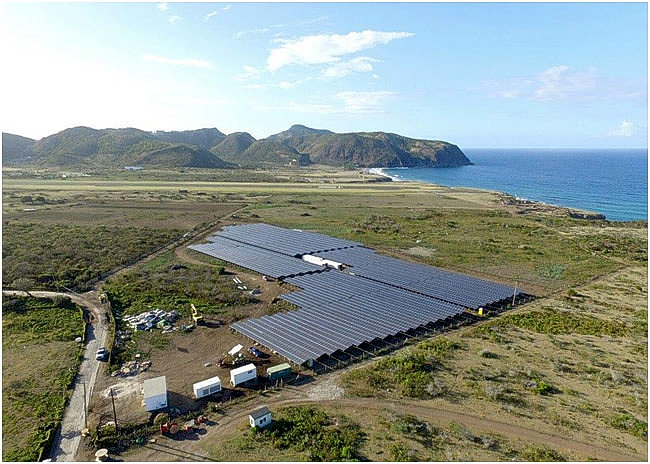 THE HAGUE–St. Eustatius and Saba are well on their way to become islands with the highest percentage of sustainable generated electricity in the world. The solar power trajectory is progressing steadily with wind and geothermal energy being a future perspective.

The first phase of the solar panel field in St. Eustatius, which has been operational since April 2016, already generates 23 per cent of the island’s electricity which increases to even 90 per cent at peak moments during clear, sunny days.

The second phase of the solar panel field in St. Eustatius should be ready by this September which will increase the percentage of solar generated power to 46 per cent. Wind energy generated through one or more wind turbines should further boost that percentage to 66 per cent in 2020.

In Saba construction has started of the first solar panel field, should be completed by this July, with the second field slated for 2018/2019. Once operational, the two solar panel fields will generate 49 per cent of the island’s electricity on an average day and 90 per cent on a sunny day.

Geothermal energy remains an option, but will only be further explored after positive try-outs using this technique have proven successful on nearby islands. For now, the focus will be on the realisation of the two solar panel fields.

The investments in St. Eustatius and Saba are part of a plan for an affordable and sustainable power supply in the Caribbean Netherlands that Dutch Minister of Economic Affairs Henk Kamp sent to the Dutch Parliament earlier this week. The plan is based on the 2016 study “Renewable Energy Future for the Dutch Caribbean Islands Bonaire, St. Eustatius and Saba” of the research bureau Schelleman & Van Weijsten Sustainable Energy Consultancy.

The latest plan drafted by the Ministry of Economic Affairs serves as a future vision for the energy supply on the islands. According to Kamp, the plan showed that affordable energy and generating energy in a more sustainable, environmentally friendly manner go hand in hand.

The plan, which was drafted with the involvement of the stakeholders on the islands, describes the concrete actions per island on the long- and short-term to ensure a further sustainable energy supply. The Minister stated that major steps have been taken to make the energy supply more sustainable and affordable with successful results.

Preparations have started to construct one or two wind turbines by 2020. The wind measurement analyses as part of the assessment to see whether generating power through wind turbines is financially and economically feasible will be completed this year.

Kamp explained that in Saba, the power plant at Fort Bay was moved to a higher location to secure the reliability and safety of the power supply. The more fuel efficient diesel generators have resulted in 15 per cent more efficiency and a 15 per cent reduction of CO2 emission.

In Saba, the first solar panel field of 1 Mega Watt (MW) at peak hours is being constructed at Flat Point and should be ready by July this year. The second solar panel field of 1MW should be constructed in 2018/2019, depending on the acquiring of the land. A feasibility study of geothermal energy will take place after 2018 if the results using this technique are positive on other Caribbean islands.

“Considering the work load of the Island Government and the local electricity company, it doesn’t seem wise to burden the island with more detailed plans for the period after the construction of the two solar panel fields, no earlier than 2019,” it was stated in the plan. Saba will not focus on wind energy.

In Bonaire, the windmills generate 40 per cent of the total electricity supply. Bonaire has potential for the technology of Ocean Thermal Energy Conversion (OTEC) which uses the difference in temperature of the deep, cold ocean water and the shallow, warmer sea water to generate power. A feasibility study will take place for the OTEC system which, if fully implemented, would enable Bonaire to generate 100 per cent of its energy in a sustainable manner.

Once all actions have been realised, the three islands will strengthen their position as a front runner and an example for comparable islands in the world, stated Kamp. With the existing infrastructure and the short- and long-term plans the Caribbean Netherlands will be among the world’s most sustainable islands where it comes to electricity production.

The Minister announced that per January 1, 2018, he will make the so-called Demonstration Energy Innovation DEI regulation available for the Caribbean Netherlands. This means that the private sector in the Netherlands and on the islands can apply innovative technologies which save energy of generate renewable energy on the local market. The DEI regulation can assist in stimulating innovation solutions for the long-term investment challenges.

The affordability of energy for households on the islands will remain a focal point. Currently the energy prices are kept at an affordable rate through the subsidising of network cost and the investments in the production of sustainable energy. Aside from the further development of the renewable energy, it remains of great importance to ensure a dependable and safe electricity supply.