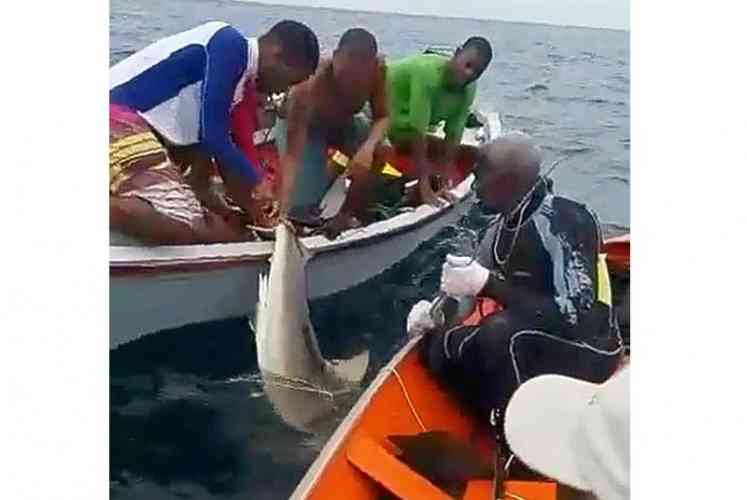 Video still of a Caribbean reef shark being finned alive in Curaçao waters.

COLE BAY–A video showing a group of men heavily mutilating and finning a live shark was posted on Facebook. The recoding allegedly was made in the waters of Curaçao and shows a group of five men who have apparently caught a shark on a fishing line repeatedly stabbing it in the head and slicing off the tail while the animal is still alive.

“The total lack of respect for marine life displayed by these men is shocking,” said dedicated shark conservationist and Dutch Caribbean Nature Alliance (DCNA) Shark Committee chairman Tadzio Bervoets. “Sharks play an essential role in our oceans. As top predators they regulate the whole ecosystem. We should be thankful we have sharks in our waters, as they keep our reefs healthy and full of fish. But here we see a helpless animal left to die a gruesome death while people cheer and laugh.”

Shark finning, or the slicing off of a shark’s fins and discarding the body at sea, is considered a cruel and wasteful practice that has been banned in most of the world’s fisheries.

Curaçao signed on to international legislation banning finning in its waters several years ago through fishery laws.

Furthermore, the government of Curaçao vowed during a Caribbean shark conservation meeting in St. Maarten in 2016 to pass legislation to create a shark sanctuary in its waters which would protect sharks from human exploitation. However, no such measures have been taken to date.

As large predators, sharks are considered key contributors to healthy marine ecosystems, adding to their biodiversity and durable functioning. The presence of diverse and abundant shark populations indicates the marine system is in a good ecological state.

Also, the presence of large, characteristic species forms a valuable commercial asset for Caribbean communities as an attraction for dive tourists.

Shocking images and videos of shark fishing and finning in Curaçao have been circulating on social media over the last couple of years, repeatedly causing a public outcry.

“In 2015, the DCNA launched ‘Save Our Sharks’ on all Dutch Caribbean islands and the Netherlands,” says Bervoets. “The project worked towards protecting declining shark populations by improving knowledge about the sharks in our waters, obtaining better protective legislation and educating people about the importance of shark conservation.

“Many positive results were obtained, including the declaration of several protected areas, and even regional protection of nine species of sharks and rays. However, this video shows us a lot of work remains to be done in legislation and control, but most of all in education. People need to understand sharks are worth so much more alive.”