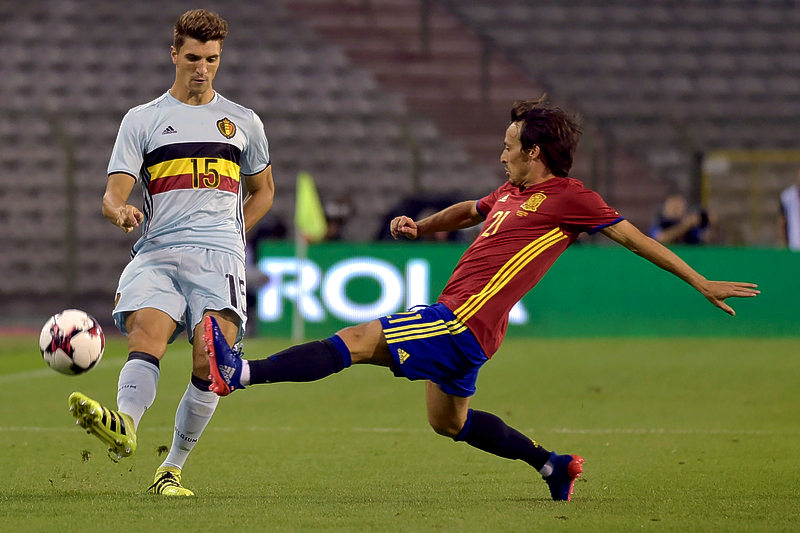 BRUSSELS- – Two David Silva goals gave new Spain coach Julen Lopetegui the ideal start with a 2-0 win that ensured a tough debut for his Belgium counterpart Roberto Martinez in a friendly on Thursday.

Lopetegui, who has succeeded the retiring Vicente Del Bosque, celebrated victory as his side largely dominated the match and showed far more threat in attack before a home crowd that showed their frustration at times with boos and whistles.
It was Belgium’s first home defeat in nearly three years.
Spain’s opener in the 34th minute came when Vitolo got behind the defence, dragging goalkeeper Thibaut Courtois towards him, and cut back for Silva to score.
Silva struck his second from the penalty spot after Jordan Lukaku brought down Vitolo just after the hour mark.
Spaniard Martinez, the ex-Everton manager who succeeded the sacked Marc Wilmots, began his term with largely the same players who lost to Wales in the Euro 2016 quarter-finals and has a lot of work ahead to craft them into a world-class team.
Martinez acknowledged Spain had taken control after an initial spell when Belgium had played well and said there were many lessons to learn in defeat.
“It’s then you see the leaders and personalities. They want to grab the situation in adversity,” he said. “We know the talent we have in the squad, but that’s not enough.”
Lopetegui said the result was perfect, but he was even more satisfied with his players’ performance, highlighting the link-up play between midfielders Koke and Sergio Busquets.
The two countries were due to play each other last November but the match was cancelled after Brussels went into lockdown following the Paris attacks.
Spain begin their World Cup qualifying campaign at home to Liechtenstein on Monday. Belgium visit Cyprus the next day.