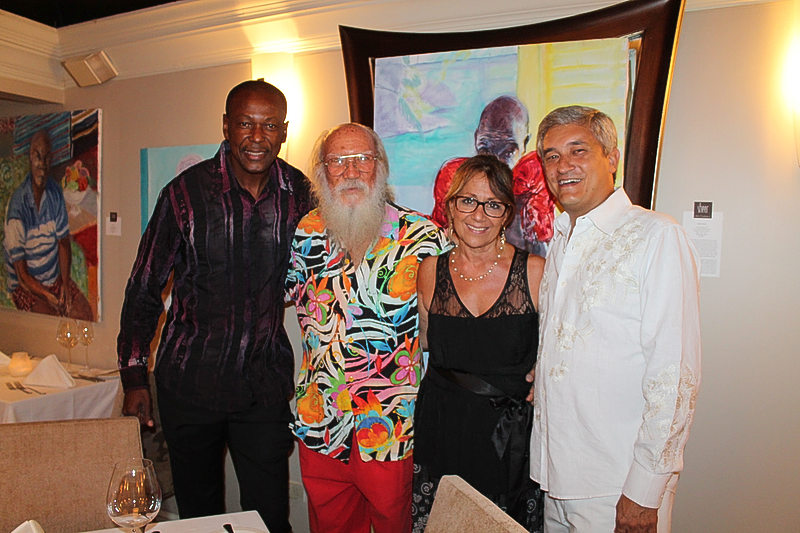 The restaurant, bar and adjoining rooms featured some 65 colourful portraits, transcending the generations with many recognisable faces, all painted from still life.

Among the privileged to have sat for the artist has been Jan Beaujon, choreographer Clara Reyes, former boxer Jesse Torres, Roseann Rumnit, Mark Yokoyama, Will Johnson, Laurelle “Yaya” Richards in her heyday, and many more.

Many of his subjects were present along with other well-known artists, friends and local personalities to celebrate the milestone with the artist and wife Laura.

Enjoying the cocktail party was Member of Parliament (MP) Theo Heyliger and from the French side Territorial Councillor Jean-David Richardson.

“It did come as a surprise, this 50th anniversary, until it was pointed out to me,” Roland admitted in between mingling with guests. “I’m known so well for other things but my portraiture work is not so well known and it felt like that was the best way to commemorate this event.

“And hopefully it’s a declaration; to help people understand the importance of portraiture in people’s lives, as a record but also as a form of art that has slipped away because of photography.”

The exhibition mixed work from his private collection dating back 30 years to more recent work. The pieces depicted persons of all ages, sex, race and colours, as well as several mothers with children, reflecting the diversity and variety of St. Martin and its people.

“Part of the hope is that this will inspire people to have portraits done of themselves, their loved ones, their children, their parents,” he added. “In time these portraits grow not only in material value, but sentimental value. A portrait is something that is intended to last for centuries. What it does also is leave a record of the people of this place, of this time. To me it’s very important with the privilege that I am accorded, to have models who will agree to sit.”

Richardson said he felt portraiture was becoming a more significant part of his work in this phase of his life.

“I avoided people a great deal in the early beginnings of my art and would stay outdoors. But as I’ve grown in confidence and experience, I realised that as important as it is to historically record landscapes, flora and fauna, for memory, the recording of the people is equally important.

“And portraiture is a more challenging facet of work. In rendering a landscape it will never argue that its shoulder or nose is not correct, but a person will. Portraiture takes on much greater significance in terms of challenge and responsibility, to render the subject not only in likeness but also in spirit.”

Music for the cocktail party was provided by Franklin Arrindell.