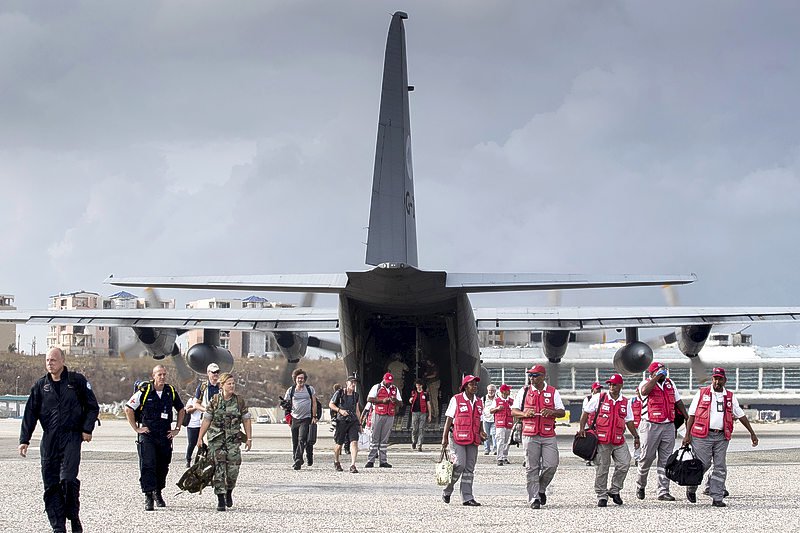 THE HAGUE/WILLEMSTAD–Sister islands Curaçao and Aruba have assumed the admirable role of assisting St. Maarten in whichever way possible. Curaçao is functioning as a hub for disaster relief goods and personnel, an airlift for evacuees and it accommodates patients from St. Maarten. Aruba is taking care of the dialysis patients and has sent manpower to St. Maarten, just like Curaçao.

Curaçao and its airport have been functioning as a vital transfer point for Defence personnel and other relief workers, and for emergency relief goods and the evacuees. The Dutch Defence facilities have been serving as the logistics coordination centre for emergency relief assistance. The Curaçao St. Elisabeth Hospital (Sehos) has accommodated patients from St. Maarten.
The airlift between St. Maarten and Curaçao for evacuees started over the weekend with the first 70 persons being transported to Curaçao. These were mainly ill and physically impaired persons, elderly, women and children, stranded tourists and badly affected family members of Defence personnel and emergency workers stationed in St. Maarten. More flights were carried out on Monday and these will continue throughout the week.
Relief workers have been standing ready at Hato airport for the past days to provide immediate assistance and those persons in need were directly transferred to the hospital. Defence’s Hercules C-130 transport aircraft and the Dash-8 of the Dutch Caribbean Coast Guard have been carrying out many flights. InselAir’s rescue operation dispatched a Fokker-50 to evacuate people as well.
Up to Sunday evening, nineteen patients from St. Maarten were hospitalised at Sehos, the Antilliaans Dagblad newspaper reported on Monday. None of the patients are in a life-threatening situation, said Sehos’ Acting Medical Director Lysandra Berenos-Riley.
The Acting Director explained that it concerned both children and adults, including pregnant women, people who required an urgent operation and persons who required hospitalisation for treatment. A special ward was prepared for the patients, who were kept in temporary quarantine out of precaution to avoid possibly contagious diseases.
Curaçao and its government have shown great compassion for the St. Maarten people. “Our thoughts are with you all who had to go through the trauma of a natural disaster of this magnitude,” the Curaçao Government said in an official statement over the weekend. People on the island have been collecting relief goods and funds for St. Maarten. Prayers were said at the various church services.
A multi-disciplinary team has been set up in Curaçao to prepare for the arrival of school children from St. Maarten. The larger school boards are making an inventory of the available spaces at the primary and secondary schools. Parents have been asked to register as a temporary foster family. Possibilities are looked at to have an emergency school for all St. Maarten pupils and students. Exam students will be given preference.
Curaçao Prime Minister Eugene Rhuggenaath has been in constant contact with the disaster teams of Curaçao, St. Maarten and the Netherlands. “The situation proves how important it is to work together,” he told the Antilliaans Dagblad.
Rhuggenaath suggested having clear protocols within the Kingdom for disaster management. “So we know immediately in the future what is needed to assist each other. We are together in this Kingdom: we each have our own responsibility, but together we can manage when a disaster like this occurs,” he said.
Aruba Prime Minister Mike Eman has expressed deep sympathy for the victims and reassured the people of St. Maarten that Aruba is there for them. Aruba has sent a team of 93 relief workers, including police officers, public works personnel, fire fighters, medical personnel and members of the Red Cross to St. Maarten.
Members of the Aruban Militia Arumil and Dutch Marines stationed in Savaneta had already gone to St. Maarten before the hurricane, as well as a small team of the Aruba Red Cross. Some 60 dialysis patients from St. Maarten are being treated at Aruba’s Horacio Oduber Hospital. Initiatives to collect funds have started.
“This is the Kingdom at its best,” the Antilliaans Dagblad stated in its editorial Monday. “Everyone of the three countries is doing everything possible to assist its fellow people in Kingdom who were severely affected.” The newspaper said that the assistance by Dutch Defence was most visible, but that the contributions of the hospitals in Willemstad and Oranjestad treating St. Maarten, or the police officers from Curaçao and Aruba who went to St. Maarten were just as meaningful.