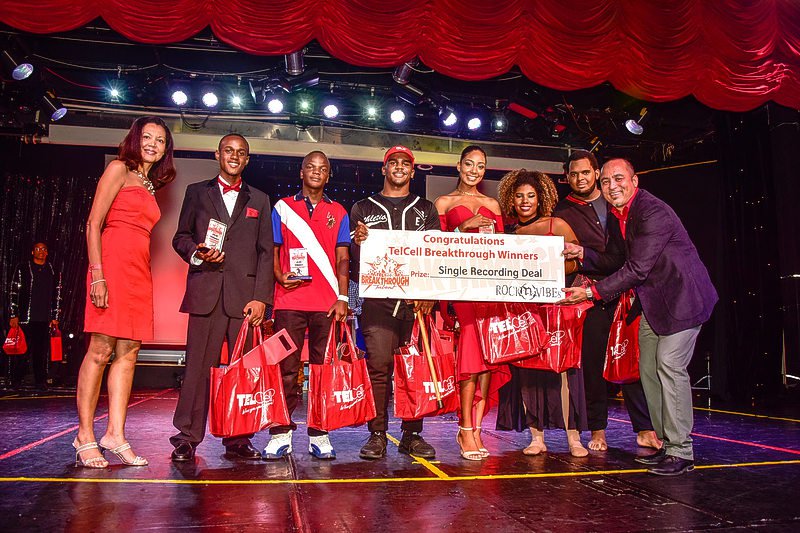 The winners were Kevin Lambert in the instruments category; Leo Alexander in the rapping category; Diandra Marlin in the vocals category; Aesha Gibson in the technique dance; Keeshaun Hodge in the urban dance and George Woodley in the rare/unique talent category.

Each winner carted off a Samsung Galaxy J7 Smartphone, compliments of TelCell; and iPad, compliments of Blue Point; airline tickets, compliments of Insel Air; a weekend stay at the Summit Hotel and a US $150 Gift Certificate from Soualiga Service Point. Their top prize is the chance to collaborate on a single and video clip under the Rock ‘N’ Vibes Label.

The first runner-up prize winners took home a Smartphone and accessories, a USB stick, a charter trip to Anguilla, courtesy of VIP Destinations and gift vouchers, courtesy of Jay and Mae Water sports.

Coordinators of the event said it had been “another run-away success” as the 20 “hugely talented” youngsters competed in the various categories. “For the fourth year running, the 20 contestants went through a repertoire of songs, jokes and dances. They also displayed outstanding dexterity and skill playing instruments and even breathing fire on a stage, where the tempo was already burning hot,” coordinators said in a press release on Monday.

“Saturday night was not only an unforgettable one for the performers, but also for the packed audience, consisting of devoted fans, members of their families, friends – and just plain old lovers of top-class entertainment.”

Co-organiser Angel Richardson of the TelEm Group said the show got off to a rousing start at Casino Royale Theatre, when all 20 contestants wowed the massive crowd and the five judges with a joint opening number that set the tone for the entire night. “With the smooth transitions of emcee “Peter J” and backstage crew, things just could not have gone better for us,” Richardson said. She said it was clear that the performers were having fun, and that the audience was really enjoying the acts before them.

“I am most proud that everyone left happy and satisfied with the judging, the performers, the atmosphere and ambience of the evening and the positive impression that our youth have once again given to their community,” said Richardson, who has also thanked the team of volunteers, who have been working for the past several weeks to ensure everything went smoothly on the night.

“Without the hard work and dedication of David Evans, Cheryl Rismay and Mr. Rude, as the backbone of the event, “this event would never happen.”

Co-organiser Berteaux “Mr. Rude” Fleming of Xtratight Entertainment was “in awe” at the spectacular night and the high quality of the acts. “Just when you think these youngsters have reached a level, then they come and hit you with another high grade of performance that just leaves you shaking your head – they are just brilliant,” he said.

The TelCell Breakthrough winners will have their talents “stretched to the limit” in the coming weeks and months by Fleming and other producers, as he takes them through the various stages of preparing for, writing, recording, mixing and performing their own CD and later, their own music video, making use of his producing and recording expertise.

Fleming will also help the youth market their talents locally and wider afield in search of a possible career in the music or entertainment industry. Organisers said the coming weeks will be very busy for this year’s TelCell Breakthrough winners and their families as they start to get involved in various activities, including having their posters placed at schools, sports venues and other key locations around the island, promoting positive and uplifting messages to the island’s youth.