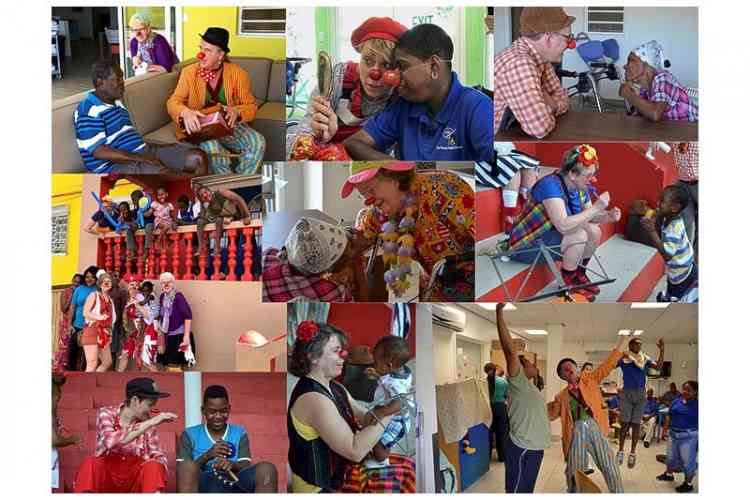 PHILIPSBURG–Devastating Hurricane Irma ravished St. Maarten in September 2017 and downed the spirits of thousands in the population who had lost their homes, their jobs, and much of their spirit to live. Two months later, a performing group of clowns came to the island to lift those spirits and bring some much-needed laughter to St. Maarten’s beleaguered residents.

The programme was such a success that another group of clowns are again on the island this week to once again bring laughter and joy to the community, which is still suffering from the effects of last year’s hurricanes.

The clowns are on the island at the invitation and coordination of Ukrainian director Albina Matuzko of Behind the Beyond the Foundation, also the initiator of last year’s visit of Clowns Without Borders.

The clowns are on the island from February 25 until Sunday, March 4, visiting elderly clients of the White and Yellow Cross Foundation, mentally challenged clients of Sister Basilia Centre and the guided-living facility in Hope Estate, elderly residents of the Red Cross, elderly clients of Hope Estate’s Old Citizens Recreational Centre, Little League Baseball’s afterschool, children of the Benjamin Home and I Can Foundation foster homes, and Prins Willem-Alexander special education primary school.

Albina said the visiting troupe are keen to also meet with St. Maarten people on the streets where they will demonstrate their playfulness and contact with the community by displaying their own brand of amazing talents and impromptu performing routines.

“They are all very skilled in the art of emotionally disarming people they meet by touching them visually and mentally with what they do so naturally,” said Albina.

For Albina it is a return to a role she loves to play and badly missed when her co-players from Clowns Without Borders left the island after their own successful visit last year.

“As a clown with the team I brought so much joy to so many faces that I was quite moved, and I was at a loss when I could not see those happy faces again,” said Albina.

She honestly believes that people living in St. Maarten, exhausted by the effects of Hurricane Irma and trying to get their roofs and their businesses back, must also be frustrated with losing their connection to the world.

“With such things to worry about such as dump fires, elections and recovery funds, we need clowns around us and interacting with us now, as never ever before. The souls need to be softened, the smiles have to get rid of sarcasm,” said the theatre director and part-time clown.

To her this shows the power of the clown and how the red nose creates its own magic. She said this is why she would like to create any opportunities possible for as many people as possible to meet with the visiting clowns and to forget, if only for a few minutes, some of the negative things that may be going on in their lives, so that they can just crack a smile, clap for joy or laugh out loud. “The louder the better for post-hurricane relief,” said Albina.