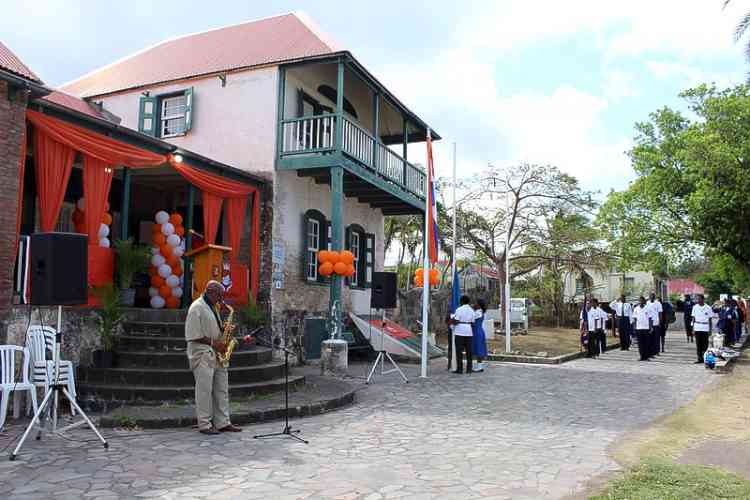 Cecil “Bruce” Dorsett playing the Statia Song as the flag is hoisted by three members of the Methodist Church’s Boys and Girls Brigade.

ST. EUSTATIUS–King’s Day was celebrated in St. Eustatius on Saturday with a ceremony in front of the Historical Foundation’s Simon Doncher Museum. A small crowd turned out for the ceremony, some dressed in the house of Orange’s colours.

The ceremony featured the national “Het Wilhelmus” anthem performed by Miranda Ignacio-Roosberg, while Cecil “Bruce” Dorsett played an instrumental version of “The Golden Rock” on saxophone. During the anthems, the Methodist Church’s Boys and Girls Brigade hoisted the flags. The programme was mostly carried out by pupils and students of the various schools on the island.

Student of Gwendoline van Putten School Anesthesia Kortstanje was the Mistress of Ceremonies for the event. The ceremony featured various performances and speeches.

Ramona “Sexy Mona” Hendrickson-Duinkerk performed her Calypso “Three Cheers for the Red, White and Blue”, as she donned the Dutch flag during her performance.

Deputy Government Commissioner Mervyn Stegers gave a speech in which he recalled fond memories of what was then known as Queen’s Day from when he was a young boy growing up in the navy town of Den Helder. He reminisced about the large parade that took place of hundreds of military personnel marching while accompanied by a brass band. During the parade, he said, military personnel were given royal decorations by the vice-admiral.

Stegers also recalled the children’s parade for which children would decorate their bikes in the royal colours and ride through the streets. Sadly, he was not able to take part as he did not receive a bike until his 12th birthday, he said.

“There are so many religious denominations and political parties and the one thing that binds us all together through the ages is the royal family. I think we should be very proud and happy to still have the royal family, that even today brings us together. I hope it will keep us together for all the years to come.”

After the ceremony, the Boys and Girls Brigade paraded to Gertrude Judson Bicentennial Public Library where a free breakfast was served.