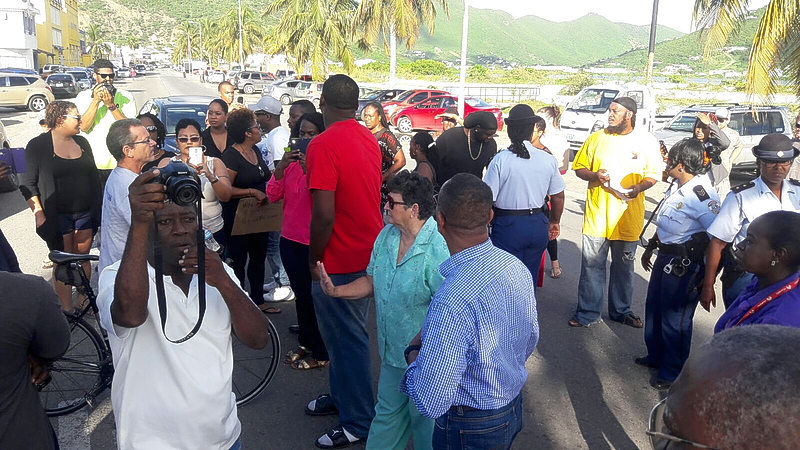 PHILIPSBURG–A small crowd of consumers numbering between thirty to forty persons took to the streets on Monday to express their frustration over the frequent power outages and what they see as the lack of communication from Utilities Company GEBE.

The protest followed more than a week of widespread and lengthy power outages around the island stemming from issues with GEBE’s generators.

Reports circulating on Monday indicated that another protest action has been organised for today, Tuesday, starting from in front of the new Government Administration Building and including a walk to the Parliament Building. Further details of the action could not be ascertained as coordinators of Monday’s protest said they were not involved in organising the action set for today, though they plan to be present if the action goes ahead.

During Monday’s protest, consumers gathered at GEBE’s main office on the Walter Nisbeth Road (Pondfill) from early. At one point, when they felt as though they were not being taken seriously, the group took to the streets and blocked the road in front of the Utilities Company.

Shortly after a small group of four of the protestors were invited inside to speak to management. The protestors dispersed after 9:00am after they were briefed on the outcome of the meeting with management.

Coordinator of the protest Michael “Sponge” Angelo said the three main areas of concern for protestors had been the lack of communication from GEBE to consumers, compensation for damages incurred during power outages and relief for consumers.

In an invited comment on the matter, GEBE said the issues raised by the group included poor communication by GEBE, concerns that the company does not “care for its customers” and questions about honouring claims for damages. The group also inquired about relief for customers and suggested that GEBE’s bills were the highest in the regions, amongst other concerns.

GEBE said it made a presentation to the group explaining the circumstances that lead to load shedding. GEBE said it stressed that it was not shying away from informing the public about the issues as it has provided information to consumers via the media “very often” over the past months.

Management alluded to the public information session it held on October 27 to enlighten the public about its operations and plans, however, although the session was widely advertised, only a handful of about 10 persons showed up to listen to the information and to ask questions about their concerns.

Management said the group requested that another public session be held to inform and educate the public about GEBE. The company said it can do this, but noted that it has to be conducted “in an orderly and respectful manner.”

GEBE said the group also raised concerns about the issues affecting the Leonald Conner School (formerly Leonard Connor School) in Cay Bay. “We assured them that we are getting a company to have a professional test done in the [Cay Bay – Ed.] area,” GEBE said.

The protestors also wanted to know what GEBE is doing to offer a more stable supply of electricity. “It was explained that as we speak an investment was being made to have Diesel Generator #20 online next month and we are looking at Diesel Generator #21 for 2017. We are also looking at solar power,” GEBE told this newspaper. “The engine that will come online will be able to run on Natural Gas LNG which will have benefits for the public and the environment. These are also things discussed in our public information session less than a month ago and we have no problem sharing it again for those who could not make it then.”

The company said the meeting with the group had been a fruitful one. The company thanked the representatives of the protestors for sitting with them in a professional manner and sharing their concerns.

In the meantime, both Angelo and fellow protestor Sjaoel “Shooz” Richardson told this newspaper that the protest action had been a success. Angelo said management is now aware of the issues affecting consumers, while Shooz said this was a first step.

In addition to Angelo and Richardson, St. Maarten Christian Party (SMP) Leader Wycliffe Smith and another protestor formed the group that met with management.

July 27, 2021
0
As of 6:00am today, motorists will have to pay a few cents less for gasoline and diesel fuel.   PHILIPSBURG--After several price increase for motor fuels in the past three months, the most recent of which was on July 15, the...
Read more