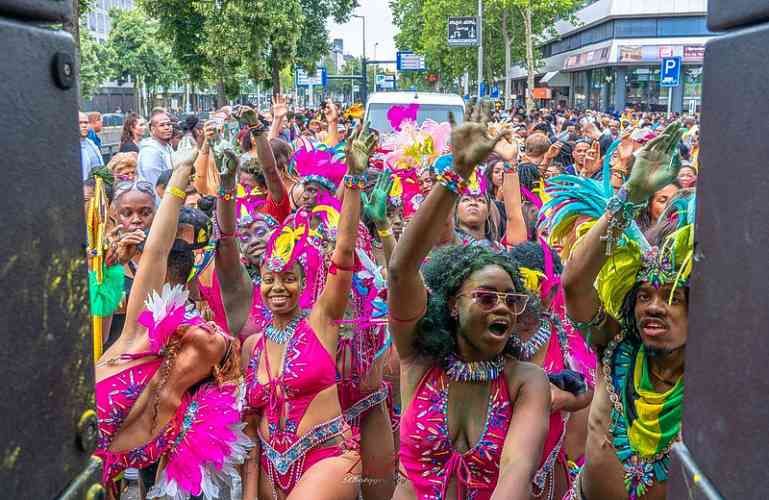 ROTTERDAM–For the seventh year in a row, Small Island Unity (SIU) participated in the Rotterdam Summer Carnival parade on Saturday, July 27. Some 120 revellers, many from the Windward Islands, gave expression to the theme “Colours of the Wind” with colourful costumes and powder on their bodies and in their hair.

Saturday’s street parade had 25 carnival groups consisting of around 2,500 participants with more than 25 nationalities. The annual event traditionally draws about 750,000 spectators who line the streets of the Rotterdam city centre to see the 2.5km long procession, led by this year’s Summer Carnival Queen Chesley Verbond.

SIU headed by its director Kyle “DJ Spy” Brown from St. Maarten, this year was again the one before the last in the line-up of the parade; and as always, the troupe was very energetic getting the spectators to dance along to the music provided by the Rebels Band from St. Eustatius, St. Maarten soca artist Ebony Empress, DJ Spy, DJ Kembe, DJ Bean, DJ Stylz and DJ Iceberg.

SIU had a larger number of revellers than last year. “We are growing every year,” said Brown. The 120 revellers wore costumes of seven different sections depicting the “Colours of the Wind” theme, colours being the essence of expression and the wind part of the theme referring to the old Caribbean saying: “We have been blown to different parts of the earth.”

A large part of the revellers hail from St. Maarten and St. Eustatius, but there was also a number of participants from the United Kingdom, Germany and Suriname. The children’s section was back this year. A number of revellers had participated in the St. Maarten carnival a few months ago and they will also jam in London’s Notting Hill Carnival in late August.

Brown said he was very thankful to the sponsors, which this year for the first time included St. Maarten’s Ministry of Tourism, Economic Affairs, Trade and Telecommunications TEATT. Other sponsors included Le Beau Reizen of St. Maartener Marlon Beauperthuy and the St. Eustatius Tourism Bureau, which sponsored the Rebels Band.

Saturday’s street parade featured 25 groups many from the Caribbean and Latin America representing countries like Aruba, Curaçao, Trinidad & Tobago, the Dominican Republic, Jamaica, Colombia, Bolivia, Brazil and Suriname. The Summer Carnival was created in 1983 by a small group of Antillean students. Western union is the main sponsor of the Rotterdam Summer Carnival.

Rotterdam Unlimited Director Guus Dutrieux said this year’s Summer Carnival drew many spectators despite the warnings of showers and a thunderstorm, and there was a good atmosphere. “We were very worried about the weather, but it all worked out. The one rain shower was too bad, but it could have been worse; and if it had been as hot as Friday, we would have had our hands full.”