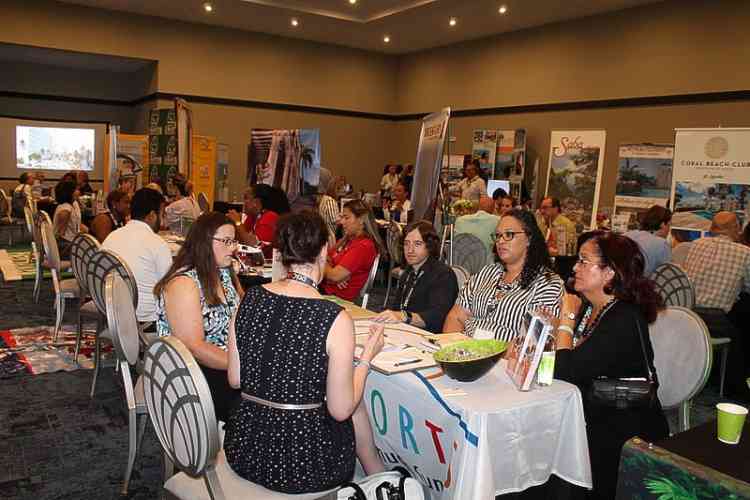 An added component to the agenda saw participants go on organised excursions in the afternoon, followed by a fabulous closing party at Kakao Beach in Orient Bay that evening with a fashion show, pole dancer Alyona from Belarus and other entertainment.

With more than 170 companies attending, and complemented by workshops given by 15 speakers, festivities, many pre-scheduled appointments, internal meetings, parties and excursions, this was SMART back in top form after a year’s absence, with the island having the privilege to showcase its own recovery and return to business.

“Seeing business conducted on the floor, with tour operators from all over the globe with many suppliers, and local businesses benefitting too, was very gratifying to see,” she enthused. “And meetings are still going on.”

Responding to a noticeably poor attendance from the South and Latin American market, she said this was due to planning and timing.

“It was hard for some of them to come to SMART this time with so much going on. But for next year we are still on the mission to increase awareness and start more activities in the South American market. We will be visiting there in July to meet and move forward. We wanted more tour operators to come, but it didn’t happen that way. In between time we might have a Latin American event to bring them in.”

Suppliers on the floor included Montserrat, British Virgin Islands tourism board, Anguilla, Antigua, Saba and St. Eustatius, and many more came from international destinations as buyers. “We had a lot more destinations attending than in previous years,” Chun added.

The first day saw a packed convention room floor with face-to-face discussions on every stand, but the following day was not as busy, possibly because attendees had already concluded business on the first day, were taking part in internal meetings, or wanted to see the island or go on excursions.

“The first day was very positive and interesting, but today we had a couple of appointments with providers who did not show up,” commented Manfredo Ruffinengo, Senior Contracts Manager from WebBeds, a European wholesaler based in Panama with key markets Northern Europe, the United Kingdom, and continental Europe. “But since 2016 we have been operating in St. Maarten. It’s my second SMART and third time on the island.”

“Generally, we have been busy and get a good feeling from this trade show,” added his WebBeds colleague Gustavo Moilnari, in charge of Mexico and the Caribbean.

Rico Louw, client account manager from the STR, a provider of hotel performance data, who gave one of the workshops, said SMART has been an “excellent” exchange point for data information. It was his first attendance at SMART.

“STR has been gathering hotel data successfully for 30 years in the USA, but with difficulty in the Caribbean region,” he explained. “We’ve managed to change that to where 30 per cent of rooms in the region are reporting to us. But we need more samples by market. We are trying to build up sufficiency so we can report back on occupancy, average daily rate (ADR), revenue per available room and other performance data.”

Milou van Steen, a tour operator from Bon Travel in the Netherlands that books individual trips and island-hopping vacations in the Caribbean, said SMART has been a success for her. “I made some new contacts, and it’s always better to meet people face-to-face,” she said. “We are very happy to sell St. Maarten.”

Among new suppliers, the 124-room Morgan Resort, Spa and Village, is under construction in the former Alegria Resort in Beacon Hill and is targeting an opening in December 2019. Morgan is a privately-funded hotel.

“SMART has been phenomenal for us. We’ve had some excellent meetings,” said the hotel’s COO, Stewart Weiner.

Also due to open on the French side in Anse Marcel is Secrets Saint Martin Resort and Spa (formerly the Riu Palace). Sales Director Jose Castillo said the hotel is on schedule to open in March 2020. “We already have reservations on the books, starting March 1,” he disclosed.

One of the innovative ideas for this SMART was to invite participants to mystery dinners on Wednesday night. This was organised by French-side hotel association AHSM Executive Director Veronique Legris. Lucky participants were chosen by St. Maarten Hospitality and Trade Association (SHTA).

“We chose restaurants in Orient Bay to showcase our gastronomy and give participants a different experience in each,” she explained. “Grand Case unfortunately was not ready for this.

“Seven restaurants participated and we explained to the owners the objective of SMART and to give the tour operators a good experience. The restaurants each made a special menu at a very good rate. We had close to 100 participants with groups of 10 for each restaurant. There was musical entertainment and a fashion show in the village. It was a great success.”

Restaurants that participated were Piment, Sao, Côtes Plages, Le Petit Bistro, L’Atelier, La Voile Blanche, and La Trattoria. Each restaurant had a host from the SMART organisation, SHTA and an elected official.

A press conference was also held Thursday where the respective tourism representatives gave an update on the island for the benefit of wholesalers and tour operators. SXM Airport Chief Executive Officer (CEO) Brian Mingo gave an update on the current situation of the airport and its future plans.

A separate article will be published on the “Green Room’s” sustainable tourism initiatives.