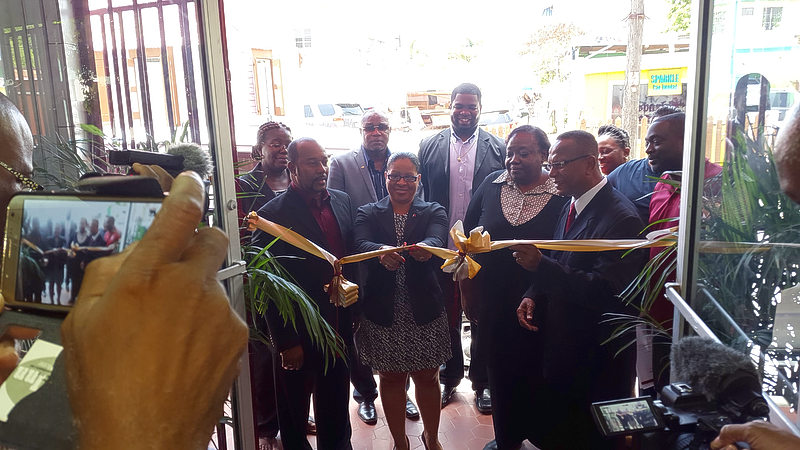 PHILIPSBURG–St. Maarten Christian Party (SMCP) opened its headquarters on lower Back Street and launched its manifesto on Wednesday, becoming the first party to do so ahead of the September 26 Parliamentary elections.

Party leader retired pastor Wycliffe Smith described the manifesto as a “sober” and “carefully thought out” document compiled with the input of the people from the beginning to end. The manifesto is without the photos that other parties use “to camouflage the lack of content.”

The manifesto of the party should not be confused with a governing programme, he said. The manifesto reflects the opinions, intentions and objectives of the party starting with Parliament. “After all, this is an election for parliament, not the government,” he said.
In Parliament, the party will focus its attention on establishing a code of ethics and to “raise the bar” in debate and discussion. Laws in need of updating will be top priority.

The establishment of a sound national development plan to guide the country and its people forms part of the good governance approach of the party.

Safety and security of the country is paramount, said Smith. The establishment of more police outposts and ensuring law enforcement officers have access to continuous training are on SMCP’s priority list.

Revamping the education to better serve everyone, with an emphasis on special education and gifted programmes, will be pursued by SMCP.

Strengthening ties with the French side, rebooting tourism and encouraging residents to get to know the country more, simplifying the tax system for improved compliance by taxpayers, and the provision of quality health care form part of SMCP’s vision for the country.

Smith said SMCP when in government will not discard the good projects started by a previous government. The party will continue these for the betterment of the people and give credit to the ones who started the process.

The community should not see the word “Christian” in the party’s name as “a threat.” The party will not turn the country into “a Christian state,” rather once elected, party members will “govern on Christian principles,” the party leader said.

Fear of the party closing casinos is unfounded, he said. “We can’t ban casinos. There are people who work there, but we will uphold the laws.” The law limiting the number of times locals can visit the casino per month will be one of those to be better enforced by the party.
Carnival will not cease to exist under an SMCP government. Carnival is a cultural expression of the country, Smith said. What will be looked at is the nudity and vulgarity seen in the parades. “We will seek to improve the quality of carnival,” he said.
Party president Jacqueline Godet said SMCP is proud to represent the people. “We are excited, encouraged and hopeful … for better days.” The party is the coming together of not only churches, “but people with good morals at heart.”

SMCP will host a youth congress next month to engage the young people in the electoral process and to garner their concerns and views.

The party headquarters is open to everyone who wants more information about the party, candidate Peter Gittens said. The manifesto is also available at the office on Back Street 166, a stone’s throw away from the Electoral Council office.