Home Local News SMCP presents itself as ‘alternative for change’ 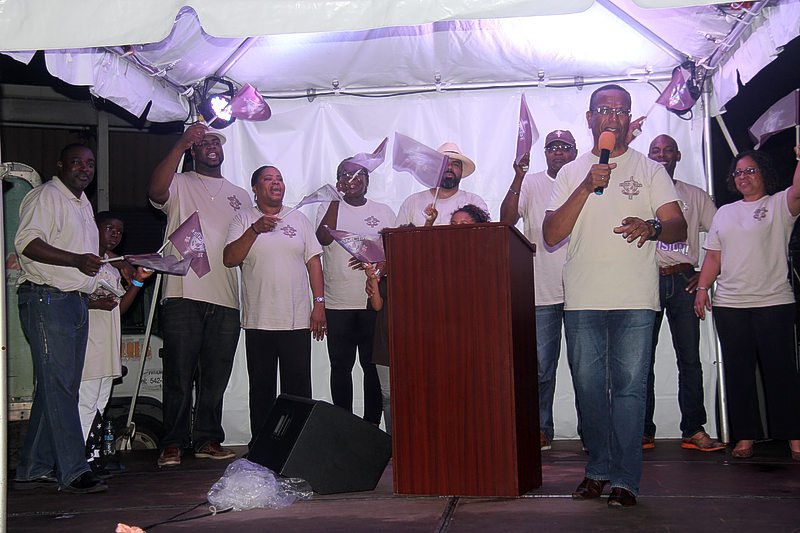 MADAME ESTATE–A small but highly appreciative crowd gathered at the ITC parking lot on Friday evening, for St. Maarten Christian Party’s (SMCP’s) final election campaign meeting. In contrast with Wednesday’s public meeting at Belvedere, which was disrupted by people who saw it fit to throw rocks at the crowd, Friday’s meeting passed without incident.

“SMCP remains calm amidst every storm. We do not panic, we plan, we praise and we pray,” SMCP leader and number one candidate Wycliffe Smith said Friday, when commenting on the Belvedere stoning incident.

Under the motto: “Serving You for a Change,” Smith and SMCP’s eight other candidates on the ballot presented their party as the alternative to make a change for the betterment of St. Maarten.

All of SMCP’s nine candidates on their list are equipped to lead this country and “restore the principles on which St. Maarten was built,” Smith said. “St. Maarten needs good people, people of integrity and willing to make sacrifices, such as all candidates made in this campaign. We need all these good candidates in Parliament as they complement each other,” he said, adding that each candidate is equal in capacity and skills.

The SMCP party leader is confident in a good election result as the newcomer on the ballot. “We will remain independent in deciding who we’re going to work with,” after the election, he said. “This is an independent party. We are not a part of any vote-dividing scheme,” he said.

“We do not need another party. If God is for us, who will be against us? We are here to serve the people and make a better St. Maarten that is the only reason why we are here. Now is the time to turn things around in voting for SMCP. You have the power in hand,” the SMCP leader said.

“On D-Day we will decide the future of St. Maarten: change or the same old,” Smith said about today’s Election Day. “We told the truth and held a clean campaign in which we informed people about the roles of Parliament and Government for voters to make informed decisions.

“We made no promises, but offered good governance, integrity and loyalty. Within SMCP there will be no jumping to any other ship as this is a good and sound ship. SMCP is a party with principles and offers a stable government. We already made a difference, we already won and we’re not even in Parliament and Government yet,” the SMPC party leader said in concluding his speech.

Source: Daily Herald
SMCP presents itself as ‘alternative for change’