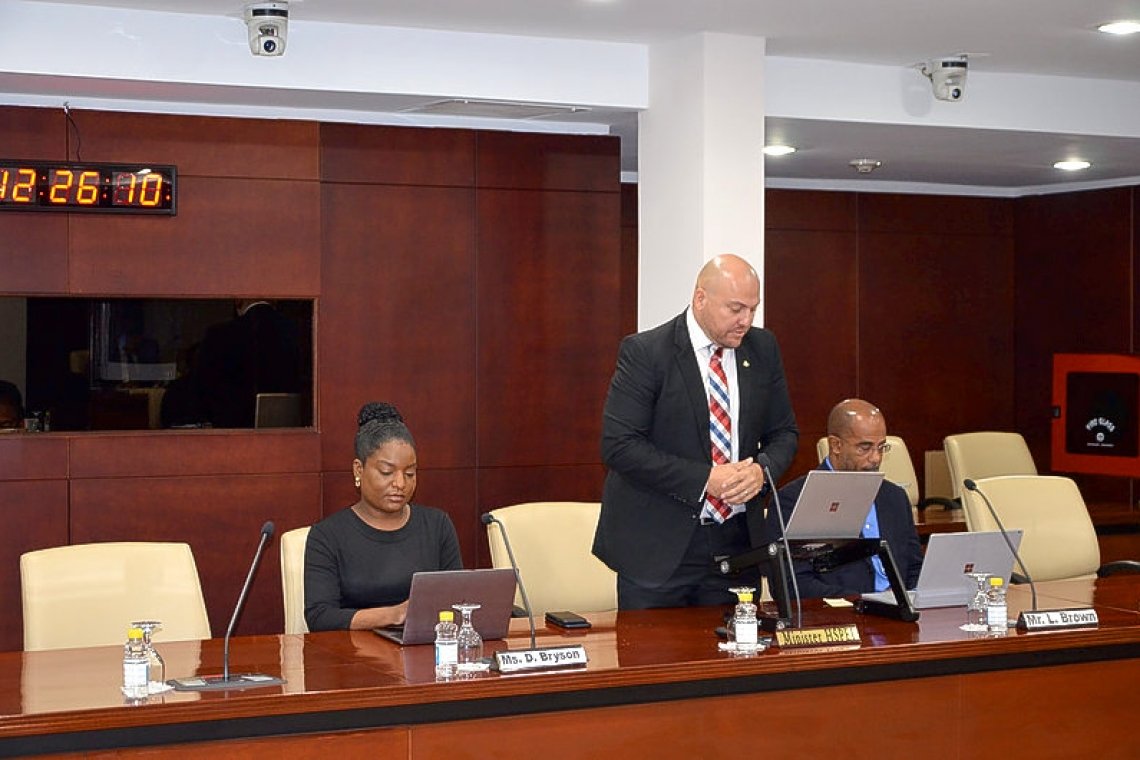 PHILIPSBURG–Representatives of St. Maarten Housing Development Foundation (SMHDF) did not attend Thursday’s urgent plenary public session of Parliament, which saw Members of Parliament (MPs) across the political spectrum voice criticism and concern over the foundation and its operation.

SMHDF and Public Housing, Spatial Planning, Environment and Infrastructure VROMI Minister Christopher Wever were called to this meeting, which was requested by MPs Anna Richardson, Solange Ludmila Duncan, and Rolando Brison on Tuesday, January 21. The meeting was to discuss the status of repairs to public homes and facilities managed by SMHDF. It was also to discuss the status of affairs at SMHDF.

Wever, VROMI Secretary-General Louis Brown, and VROMI Chief of Staff Diana Bryson were present at the Parliamentary session. Wever said in his opening statements that SMHDF representatives had indicated that they could not come to Parliament as the meeting had been called on short notice. He said the foundation had requested a postponement.

Wever said he had had meetings with foundation earlier in the week on the possibility of home ownership of the emergency homes on government-owned land and that these talks are ongoing. He particularly mentioned a meeting with SMHDF on Wednesday evening during which the foundation’s finances and challenges were discussed. Wever said the foundation would elaborate on these issues when its representatives come to Parliament at a later date.

Instead of postponing the meeting, Chairperson of Parliament William Marlin continued the session and allowed MPs to pose questions, which SMHDF representatives can answer when the meeting resumes.

All the MPs who spoke during this session voiced criticism of SMHDF. MP Richardson of National Alliance (NA) was the first to take the floor. She said she was saddened the foundation was not in Parliament.

Richardson spoke about a January 16 letter which supposedly was sent by SMHDF to persons living in the foundation’s duplexes in Belvedere. The letter told residents that the foundation will be carrying out assessments of their homes so that repair work can start on them.

Richardson said NAf. one million had been given to SMHDF in February 2019 and asked what the foundation had done with the funds in the past year. She also said she would reserve the “whole list” of her questions until the follow-up meeting.

Independent MP Brison said SMHDF had had ample time to prepare for a meeting, as it had been invited to Parliament on three separate occasions in the past year-and-a-half. For this reason, he expressed doubts whether the foundation would attend a meeting before the end of the month.

He asked Wever what level of cooperation the VROMI Ministry has received from SMHDF and about the number of roofs repaired by government since Hurricane Irma. He also questioned the foundation’s waiting lists, and its procedures on rent-to-own schemes and in allocating social housing.

He said an affordable housing law will be on the legislative agenda for this governing period, adding that St. Maarten does not have specific laws that defend social housing tenants’ rights.

“This can be a very good turning point for St. Maarten … where all finally admit the country has failed in regard to the management of social homes, of creation of affordable housing. But it can be a turning point to finally create a better way forward to put proper roofs over the heads of our people,” said Brison.

Like Brison, MP Christophe Emmanuel of NA doubted whether SMHDF will appear at Parliament before month-end.

He criticised how the foundation “treats people.” He said the foundation is “irresponsible” and that it “has no care whatsoever for the homes they are managing in Belvedere.”

MP Duncan of NA said the residents of Belvedere are the victims of the foundation’s mismanagement and organisational failure, adding that it had started long before Hurricane Irma in 2017. She also said St. Maarten needs a new approach for the new decade.

Duncan asked Wever whether SMHDF receives government subsidies and, if so, how much money it receives and whether it is meeting the criteria for subsidies.

MP Wycliffe Smith of St. Maarten Christian Party (SMCP) said he was disappointed at SMHDF’s no-show. He also said that when he was in the Council of Ministers it had been difficult to get the foundation to attend meetings.

At the Parliamentary session’s continuation, Smith requested that SMHDF show its most recent audited financial statements and an activity/financial report for the money it received from the World Bank-administered St. Maarten Trust Fund. He also asked whether all SMHDF’s homes are insured sufficiently.

MP Sarah Wescot-Williams of United Democrats (UD) asked whether technical assessments had not been done on the duplexes already. She also asked Wever about the responsibilities government and SMHDF have toward each other.

The session’s final speaker was Marlin of NA. He said it probably would be better that the foundation did not operate anymore, because it is operating horribly, citing the conditions of some residents in Belvedere.