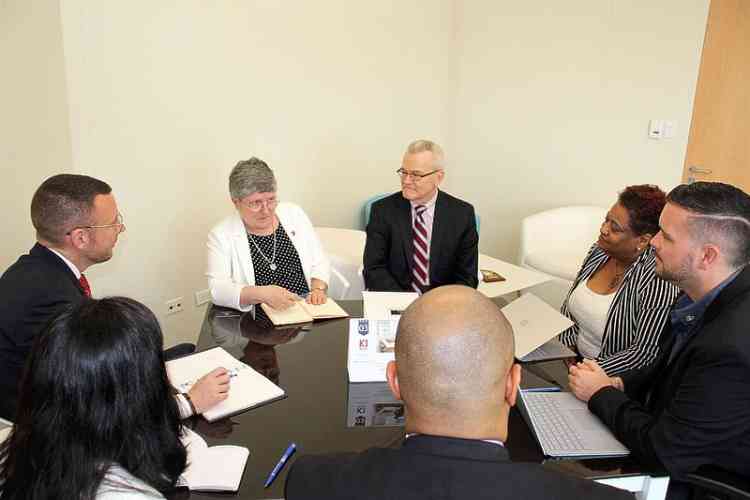 Tourism and Economic Affairs Minister Stuart Johnson met with Canada’s Ambassador to the Kingdom of the Netherlands Sabine Nölke this week. Nölke has expressed her commitment to ensuring that an active trade and economic relationship between the St. Maarten government and Canada is established, according to Johnson. “We had an excellent initial discussion and traded information on economic developments in both countries and spoke briefly about the potential for collaboration on different projects in the not-too-distant future,” said Johnson in the Council of Ministers press briefing. “I look forward to a fruitful and long relationship with the Government and people of Canada.”

PHILIPSBURG–Some of the challenges faced by St. Maarten students who want to pursue tertiary studies in Canada were raised by Education Minister Wycliffe Smith during a meeting with Canada’s Ambassador to the Netherlands Sabine Nölke and her team on Tuesday.

Smith said that during their meeting he had brought up the issue of students having to go to the Dominican Republic or Guyana to do biometrics to be admitted to schools in Canada. He also spoke about the increase in the number of St. Maarten students applying to attend colleges and universities in Canada and how St. Maarten can negotiate scholarships with individual universities in that country.

“The Ambassador promised to pass on our request and this info to see what can be done to accommodate our students who would like to study in Canada,” Smith said during the Council of Ministers press briefing on Wednesday.

The meeting was part of Nölke’s working visit to St. Maarten to learn about the St. Maarten Government, the country’s cultural heritage, education system, and how the bonds between the two countries can be strengthened.