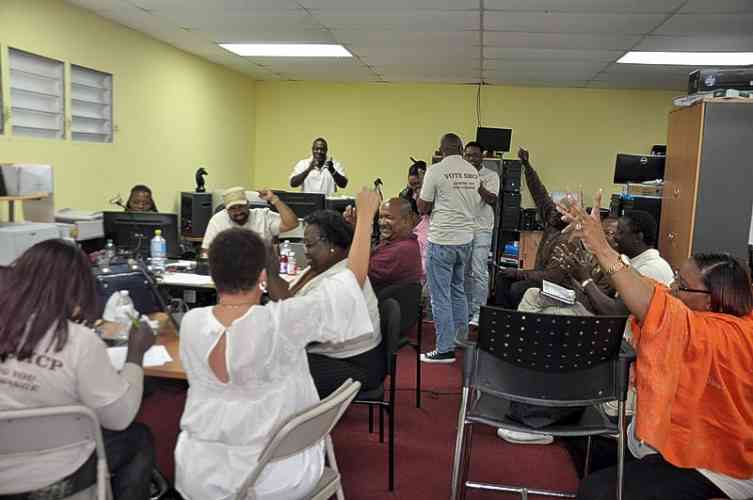 PHILIPSBURG– Roars of applause erupted at the St. Maarten Christian Party (SMCP) headquarters on Back Street early Tuesday morning when it became evident that the party had accumulated sufficient votes to secure its first seat in the Parliament of St. Maarten, after barely missing a seat during the 2016 election.

Candidates and supporters congratulated each other, gave high fives and shook the hands of smiling, but humble-looking SMCP leader Wycliffe Smith. “You’re going to Parliament,” one jovial candidate told Smith in the midst of the celebration.
“I am very happy, and I give God thanks for allowing us to come this far to get the seat,” Smith told The Daily Herald after the final numbers were announced soon afterward. “We worked hard together with all our candidates and you can tell from the reaction of everyone that we are together on that.”
Asked what is next for the party, Smith said SMCP would follow the official process and await the appointment of an informateur.
“If any government is to be formed and we are to be part of it, it has to go through the process which is the appointment of an informateur and formateur.
“The informateur is the one that will talk with all the parties and that is what we are demanding – that the informateur will talk with all parties and see which are willing and able to form a long-lasting coalition, and once that informateur has figured that out, then it will be turned over to the formateur, who will work with the parties that indicated that they are willing and able to work with each other and they would develop the governing accord and all that.”
Smith said he is not willing to engage in talks with any parties outside of this process. “That protocol was established to make it easier for parties to form coalitions and we are just going to follow that process,” he said.
As for what the public can expect from SMCP in Parliament, Smith said: “People have elected me to Parliament. The party has one seat, so that means the people would expect our party to be in Parliament. I have been writing and informing people about Parliament for the last year and a half, so this is what they can expect – more information. I will have access to information from inside Parliament and that is what we intend to do – share this information with the general public, so that they would know what’s going on.”
He thanked all the 1,181 persons who placed their confidence in SMCP and voted for the party, and for giving SMCP an opportunity to represent them and be their voice in Parliament.