Home Headlines & Top Stories SMMC CFO steps down after days of protests calling for his resignation... 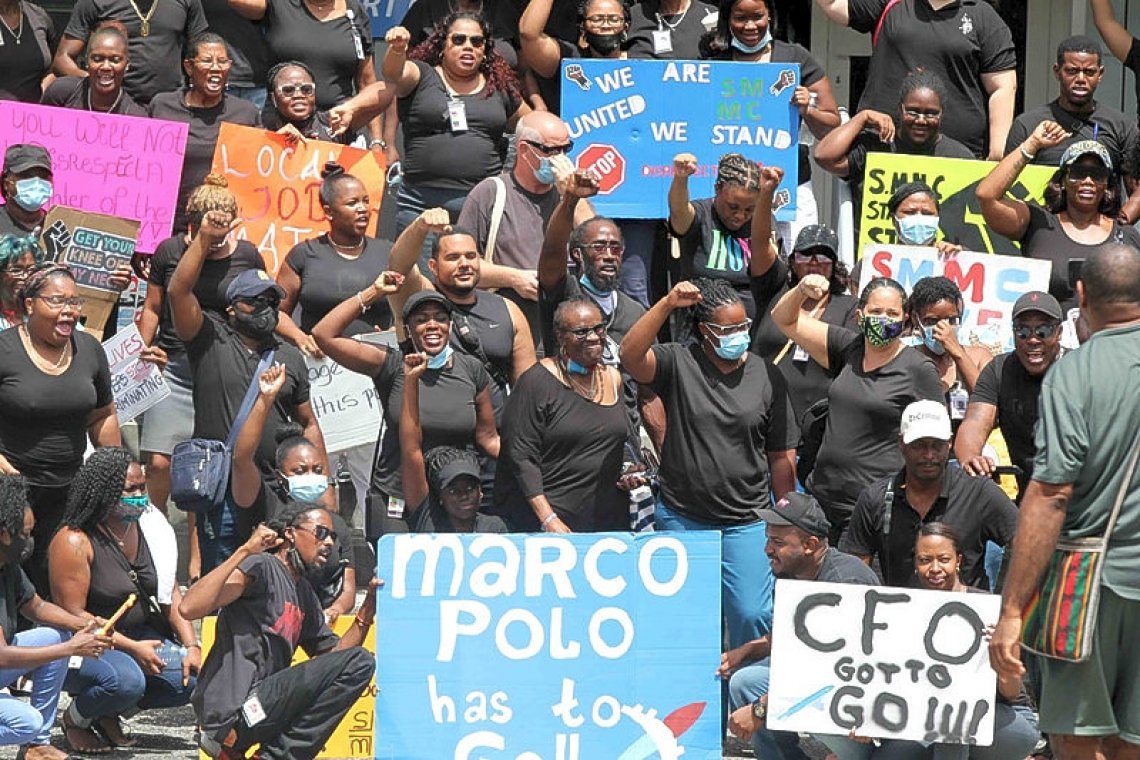 WIHCWUA members convened at the Support Center on Wednesday.

PHILIPSBURG–St. Maarten Medical Center (SMMC) Chief Financial Officer (CFO) Marco Meuleman has submitted his notice of resignation after receiving threats to his personal safety. The resignation was confirmed to The Daily Herald by the SMMC supervisory board late Wednesday evening.

SMMC staff, especially those of the Finance Department who claimed to have faced intimidation and bullying by their boss, had been calling for Meuleman’s resignation over the past six days.

Windward Islands Health Care Workers Union Association (WIHCWUA), joined by other labour unions, protested at the hospital for several days and called for Meuleman’s resignation. The unions continued their rallying and gathered outside of the SMMC Support Center in Madame Estate on Wednesday.

WIHCWUA leadership sat in a meeting with the supervisory council later.

According to WIHCWUA president Brunilda Illidge, several staff members were called in during this meeting to reiterate their experiences and grievances with Meuleman.

Supervisory Council Vice Chairman Jim Rosen formally informed the union during the meeting that the CFO had submitted his letter of resignation to the council on Wednesday morning.

In responding to a request for a comment by The Daily Herald, Illidge said that Meuleman’s letter of resignation was considered a victory for the union and all of its members.

She noted that the CFO’s ultimate resignation could be attributed to the continued pressure he received from the staff of SMMC to leave his post.

On hearing the news, sounds of cheer were echoed amongst members as they rejoiced in the outcome. WIHCWUA members later left the location in Madame Estate and reconvened at the hospital grounds.

Supervisory Council Chairman Robert-Jan James confirmed the resignation in a statement to this newspaper late Wednesday evening. “The Supervisory Council hereby informs that SMMC’s CFO, Dr. Marco Meuleman, as a direct result of threats to his personal safety received from outside the SMMC staff, has resigned from his position as CFO/member of the Board of Directors effective immediately.”

“The Supervisory Council takes his and all our staff’s safety as the highest concern and reluctantly but supportively have accepted his justified position. Further communication will be forthcoming within short for all the staff of the organisation to be able to better understand where we are and where we will be going,” James added. “For now, we believe that based on our meeting with the union earlier today, peaceful and proper dialogue can be undertaken and that we can return to a normalised work environment.”