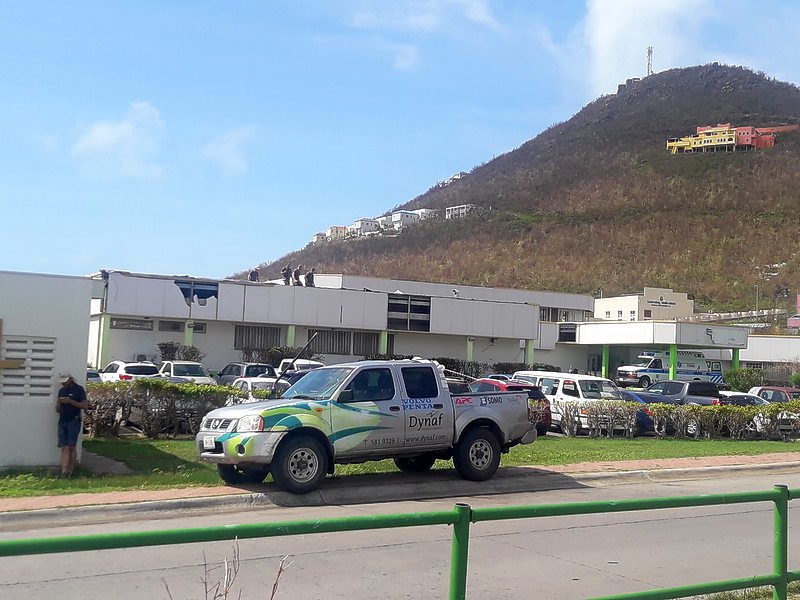 SMMC suffered 10 to 15 per cent damage to its roof and 50 to 60 per cent aesthetic damage during the passage of Hurricane Irma. The damage to the roof had been repaired prior to the passage of Hurricane Maria earlier this week.
Additionally, following Irma, one section of the outpatient clinic where the laboratory is located had been deemed unsafe and had been closed off. Also closed off was a section of the pharmacy, which was severely damaged. The lab has portable machines that can be used and all basic care was being provided.
SMMC reopened its ER just after Hurricane Irma to tend to patients. SMMC Medical Director Dr. Felix Holiday said there had been a 500 per cent increase in patients at SMMC following Hurricane Irma, but not so many following the passage of Hurricane Maria, as most general practitioners had reopened their offices for a few hours a day by then. Most of the cases at SMMC’s ER had been patients who suffered injuries such as cuts, gashes and fractures from falls, but nothing major.
Hurricane Maria did not cause any structural damage to the medical facility.
Immediately after Irma, SMMC’s total bed count went down from 69 to 55. Following repairs to its roof, the bed count now stands at 63. Two rooms with a bed count of five are still to be repaired before they can be put back into operation.
“The bigger damage in the Outpatient Department and at the pharmacy is progressing slowly. Of course, materials are needed and we need workmen to get that work done, and seeing that everyone is affected, material and people to get the job done are issues,” Holiday said.
Emergency services were not hampered by either hurricane and continued normal operations immediately after both hurricanes. All critical departments are fully functional, such as the Emergency Room, X-Ray Department and Intensive Care Unit (ICU).
Damage assessments were conducted by specialists from the army. SMMC is hoping to also conduct its own assessment using local experts.
Holiday said given the force of Hurricane Irma, the need to reassess materials used in construction to withstand such powerful hurricanes needs to be reassessed.
SMMC’s operations continued before and after the passage of both hurricanes with eight babies being born before Hurricane Irma and seven before Hurricane Maria.
“The staff of SMMC has shown once again their dedication and reliability in serving the community of St. Maarten,” Holiday said.