The clinic is equipped with the latest equipment for eye care, which is not yet available in the Netherlands, ophthalmologist Dr. Jerrel Pawiroredjo, who coordinated the project, said during a tour of the new facility.

With the opening of the clinic, SMMC is now able to diagnose and treat most eye conditions on the island, which Pawiroredjo says is a significant step forward in the service to the community.

He told guests during the opening ceremony that when he first visited St Maarten three years ago for a Rotary Club eye exam project he had noticed that there were no eye services available at SMMC. One year later he returned with his colleague Dr. Michael Siban to have talks with SMMC’s board of directors about the possibilities of setting up this service in the country.

“Eye care is in high demand nowadays as people get older and the visual needs of especially the elderly increase in the era of mobile devices and Internet. In addition, non-communicable diseases like diabetes and hypertension which affect the eyes are also worldwide on the rise and the Caribbean countries are no exception to this,” he said.
He added that a population survey in his native Suriname had shown that the most common causes of blindness and visual disability are refractive errors (people simply needing glasses), cataract (clouding of the lens in the eye mostly due to ageing), glaucoma – a disease related to a high eye pressure (irreversible damage of the eye nerve, more common in people with African roots), and diabetic eye disease.

“We believe that these statistics more or less also apply to the community in St Maarten and that we also have focus on addressing those issues in the SMMC.”

He said eye care has evolved into a highly technology-supported discipline with assistance from optometrists, technical ophthalmic assistants (TOAs) and nurses.

A team from SMMC and the Suriname Eye Centre joined forces in the past year and has worked steadily on the implementation of a state-of-the-art facility in SMMC. A training programme was set up in the Suriname Eye Centre, equipment and software were identified and purchased, and a team of nine “enthusiastic” eye doctors from Suriname and the Netherlands, all of whom have different sub-specialisations, was put together.

“I must say that I am truly impressed with the efficiency and determination that was displayed in the process of preparation and executing of this project that was even interrupted by a natural disaster. No nonsense and just do it,” he said.
Ophthalmology was introduced as a new service for the public on September 3. This is the first time the hospital will be able to provide such treatment options within its roster of care.

The eye specialists plan to educate the community on common diseases and the prevention of blindness. They also plan to partner and consult with all general practitioners and internal medicine specialists to establish an efficient referral and feedback procedure.
SMMC Medical Director Dr. Felix Holiday said it had been “quite a journey” and he is proud that all stakeholders had worked together to realise the project.

In a video message during the opening ceremony, SMMC General Director Kees Klarenbeek said the opening of the clinic is a time to celebrate the adding of a new specialty at SMMC. He said continuity of care and the provision of quality care are important and are both being met with the new clinic. The opening of the facility would mean less stress for patients and would contribute to saving costs, he said.

“I am very confident that we will meet the expectations of every patient, government, insurance companies and the inspectorate,” he said.

Health Minister Emil Lee said it was important to take time out and recognise milestones like the one marked with the opening of the Eye Care Clinic. The opening of the clinic was possible thanks to funds received from the Caribbean Netherlands, which were used to help purchase state-of-the-art equipment for the facility. Lee said he is confident that the country is on the right track.

Following the official speeches, guests toasted to the opening, the ribbon was cut and attendees were treated to a tour of the new facility. Lee’s eyes were tested using the new equipment and he was given a positive report on his eyes.

Other dignitaries at the opening included the director of the hospital in St. Eustatius and representatives of many health care institutions in the country. 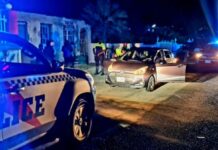