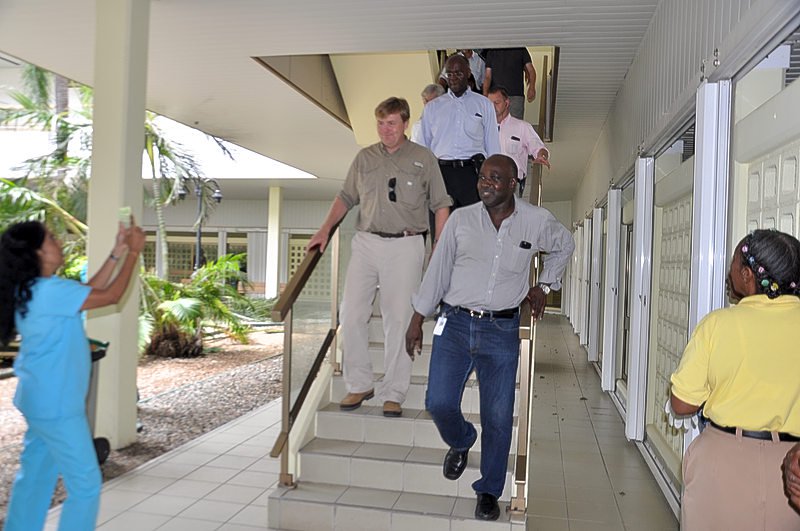 CAY HILL–St. Maarten Medical Center (SMMC) is hoping to resume its outpatient services to the public as of this Wednesday or Thursday, SMMC Director Dr. Felix Holiday told The Daily Herald on Monday.

Before resuming outpatient services however, SMMC will be checking its computer systems to ensure that all is in order. The computer systems had been powered down during the passage of Irma to minimize the possibilities of damage.
SMMC has been having daily meetings with specialists and nurses to assess the functionalities that SMMC has to reopen on short notice. He said it made no sense to open outpatient facilities at this time as the curfew is still in effect.
The resumption of partial service from general practitioners on Monday is expected to significantly alleviate the burden on SMMC, which has been seeing many patients over the past days.
Holiday said SMMC suffered between 10 to 15 per cent damage to its roof and between 50 to 60 per cent aesthetic damage during the passage of Hurricane Irma. SMMC reopened its Emergency Room just after the hurricane to tend to patients. Luckily, Holiday said most of the cases thus far have been patients who suffered injuries such as cuts, gashes and fractures from falls, but nothing major.
“The main damage to the hospital is the roof. Once the roof is damaged the effects are leakages,” he said.
One section of the outpatient clinic where the laboratory is located has been deemed unsafe and has been closed off. Also closed off is a section of the Pharmacy, which was severely damaged. “These have to be repaired before they can be used,” Holiday said, adding that the good thing about the lab is that portable machines can be used and all basic care is being provided.
As a result of the effects of hurricane Irma, the hospital’s bed capacity has been reduced from 67 to 55. A total of 25 beds are currently occupied. Holiday said all critical departments are fully functional such as the Emergency Room, X-Ray Department and Intensive Care Unit (ICU).
Damage assessments were conducted by specialists from the army. SMMC is hoping to also conduct its own assessment using local experts. He said given the force of hurricane Irma, the need to reassess materials used in construction to withstand such powerful hurricanes needed to be reassessed.
In the meantime, Holiday, members of SMMC’s Supervisory Council, Health Minister Emil Lee, Social Health Insurance SZV official Glen Carty and other officials met with King Willem Alexander during his visit to the country on Monday. Holiday said the joint message from parties during that meeting was to stress the importance of having a new hospital to provide care to the public. The current hospital is not functioning under capacity and the need to render modern up to date services is critical.