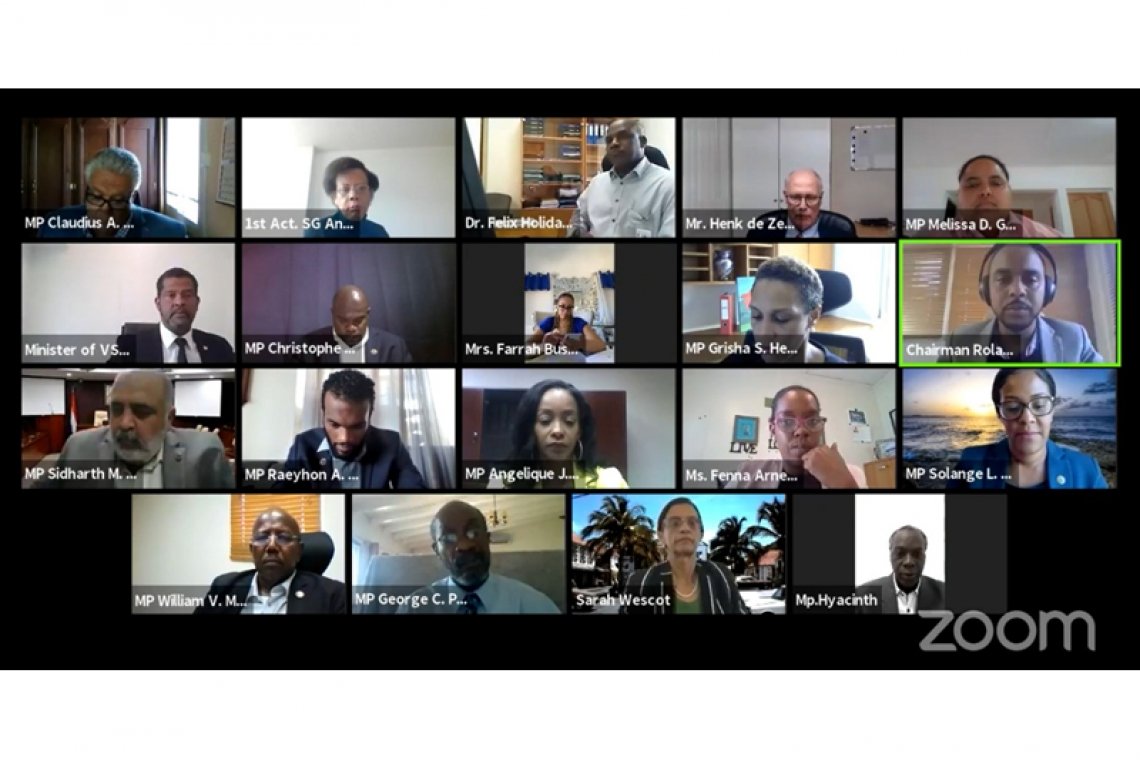 PHILIPSBURG–Representatives of St. Maarten Medical Center (SMMC) provided Members of Parliament (MPs) with an update on the future plans for the construction of the new St. Maarten General Hospital (SMGH) and the company entrusted with the construction project, INSO, on May 18.

Dr. Holiday on behalf of the SMMC board thanked parliament for the invitation to the meeting. He further introduced SMGH Project Manager Henk de Zeeuw.

De Zeeuw provided an overview of the new hospital, its current status with construction and what is expected within the new building. In his outline he gave a summary of SMGH’s construction value. He said, “We have a contract with INSO for 136 million dollars. Of that we have … 78 million for design and build, 36 million for the maintenance and 22 million for replacements.”

De Zeeuw said the current design-and-build component of the new hospital is based on a turnkey lump sum project. INSO is tasked to design and build the general hospital with 110 beds divided over the main building and the wing. INSO also has to deliver and install all medical equipment, furniture and fixtures, design the information and communication technology (ICT) network, and demolish the existing hospital.

INSO will also have to design and build parking facilities and a helicopter platform.

He said the design-and-build component is considered as an Investment-Capex budget where the maintenance and replacement are due in instalments over a period of 20 years after the new hospital is ready. “The components, maintenance and replacements are basically total amounts for the 20 years. Based on the certain allegations it will be divided over the 20 years,” he added.

He assured that there is money to finance the components of maintenance and replacement, “We will pay it over the 20 years and basically that’s part of our normal profit and loss, our normal expectations of the hospital. So, when we talk about the budget we include the design and build,” he added.

He said this is all included in the $78 million Capex budget.

The source of funding for the Capex budget, according to De Zeeuw, comes from three sources: the lenders and financial institutions, the World Bank and SMMC.

In 2018 the hospital signed a loan with a group of lenders and financial institutions in St. Maarten and Curaçao for $75 million. The World Bank is providing the hospital with a grant of $25 million from the Dutch trust fund set up after Hurricane Irma. Out of the $25 million, $17 million was reserved as an investment for the new hospital project.

According to De Zeeuw, as of April 30 approximately 15.8 per cent of the Capex budget has been spent, as the project in ongoing.

He said INSO had delivered the first draft of the final design in January 2020, including a very detailed and complex room-to-room book and indication of medical equipment placement within the new hospital building. This design was initially reviewed by SMMC and then the Joint Commission International (JCI).

The first-draft design was not complete and INSO is currently working on the redesign, which is expected at the end of July.

De Zeeuw said INSO had started with the site preparations in January, which consisted of cleaning, fencing, security, assembling tower cranes, connections to utilities, installation of workshops/offices and the preparation for early works.

The project was suspended on March 11 as a result of the COVID-19 pandemic.

De Zeeuw said this suspension of work, however, is not applicable to the finalisation of the final design.

As the government lifted the lockdown for construction companies on May 11, he said the hospital is now in discussions with INSO to resume construction works. He said the travel ban is, however, still affecting the resumption of construction.

During the first round of questions United St. Maarten Party (US Party) MP Claudius Buncamper questioned whether the financiers are all still on-board in light of the current situation with INSO being sold without any guarantee from the Italian government.

“A lot of things are happening in final designs and restructuring of the building and redoing the building, etc.,” he added.

He announced a proposal on refinancing of the new general hospital by the Dutch to help St. Maarten. He said this proposal would be shared during the second round of questions.

“If we decide not to continue with INSO, what will be the consequences, as I know before COVID it would cost our government and SMMC millions of dollars to void the agreement? Does that [remain – Ed.] the same after COVID-19?” he asked.

National Alliance (NA) MP Christophe Emmanuel asked, “Is INSO looking for a local contractor to work through, seeing that INSO does not have the capability to pull off the new general hospital in St. Maarten?”

NA MP Hyacinth Richardson asked, “What is the cost of the redesign of the new hospital?”

Panneflek in consultation with his team and the SMMC representatives requested a two-week period to allow all parties sufficient time to gather all answers to the various questions posed by the MPs.

The meeting was adjourned until a later date.