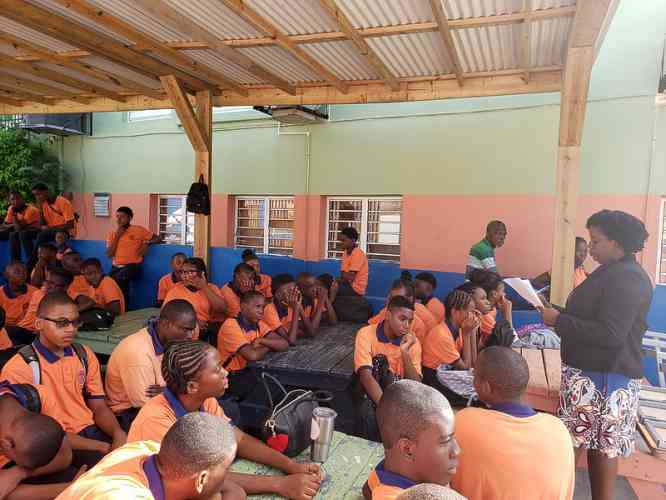 SMVTS students catching up on the first day of school.

SOUTH REWARD–St. Maarten Vocational Training School (SMVTS) has tightened the screws on students having mobile phones in school and warned students on Monday that if they have their communication devices on them, to keep them concealed as unconcealed ones will be taken away.

Principal Rita Gumbs told students at the school assembly that while she believes in technology, the school will not be policing students and playing detective to look for lost or missing mobile phones in school this academic year.

Mobile phones that are confiscated from students will have to be picked up by parents. SMVTS opened with 230 students and counting.

Gumbs also urged incoming students to immediately report bullying so that the school can intervene. “In every environment there are bad potatoes, and if a rotten potato tries to mess with you, please let me know,” Gumbs told students during assembly on Monday morning. “If anyone tries to bully you, tries to take your money, encourages you to smoke or encourages you to skip classes and go down the road and hang out, if you don’t tell me, it will continue for the entire school year.”

She spoke about the importance of attending each and every class and not skipping, as this affects students’ performance. “When you leave these gates, you should have accomplished something. There are students who graduate who can fix their car, their parents’ car and their neighbour’s car and make a living. This is what we want for you and it is what you should want for yourself.”

Gumbs told The Daily Herald after the school assembly that although SMVTS is currently operating at over-capacity, the opening of the new wing, which is expected to be take place soon, will ease the capacity issues and more comfortably accommodate existing students.

Currently, the school has a schedule whereby students have to leave early due to capacity issues. Gumbs wants all students to remain in school until dismissal time. The new wing will comprise six classrooms with an additional room that can be used as a multipurpose or technology room.

As for performance, Gumbs is proud of how students have been performing. For the last school year, 34 students sat final exams and only three, who were not attending school, failed. She said she, the Education Minister and the Director for Public Education are looking “for a new path” for the school so that it can be structured better and ensure that there is a curriculum in place.

“We do have successes, but in terms of structured programmes – that’s what we are working on,” she said.