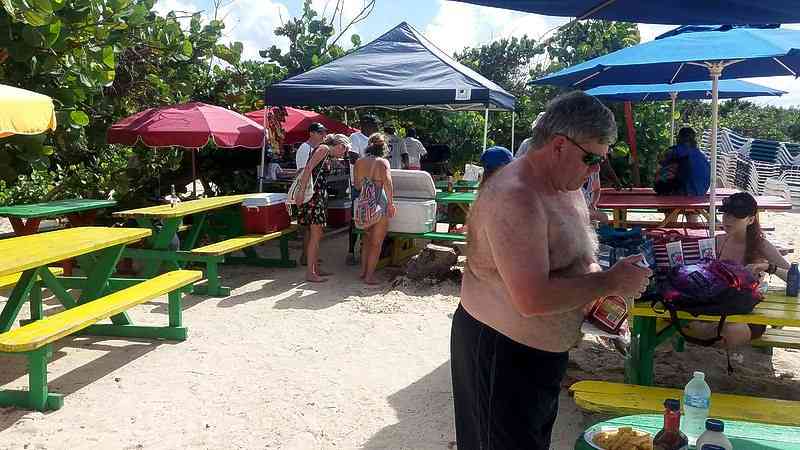 MULLET BAY–Daleo’s Snack permit holders David and Leopold York said on Monday that after years of harassment, bullying and sabotage, they are calling a stop to what they called the underhanded tactics displayed by the owner of Mullet Bay Beach Resort and its representative Clarence Derby.

The Yorks reached out to the media on Monday with several concerns. They allege that despite having the necessary vending licence to operate their business, they have suffered years of attacks from the resort reaching a culmination after the passing of Hurricane Irma in September last year.
They said that three weeks after the hurricane, as the curfew was lifted, they and their employees spent hours clearing a path and cleaning the area surrounding the snack bar. They returned the next morning to find the platform of the business, which had been intact the day before, in shambles.
Their suspicions were confirmed when they arrived back on the beach on the morning of October 5 and met a worker burying the rubble of their platform under the sand of the beach. They allege that the worker confirmed that he had been sent under Derby’s direction.
The snack bar, in existence for the past 21 years, was opened by the two local entrepreneurs after losing their jobs when the resort closed in 1995 after the passing of Hurricane Luis, along with two of their original employees and a local staff that has fluctuated up to nine persons over the years.
The pair said they have provided food and beverage, umbrella and beach chair services to thousands of guests at the beach, tourists and locals alike.
“This has been our livelihood for over two decades,” Leopold said. “We were granted the licence to operate in 1997 and we’ve had a permanent licence since 2007. We pay our permit fees and taxes every year without fail and all of our employees are covered under social insurer SZV as required by law. We have the right to be there. The permit says we have the right to operate our business. All we want is to operate in peace.”
David said, “Throughout the years we have had storms and various hurricanes damage our structures, but we rebuilt. When we lost our stock of umbrellas and beach chairs in the fire maliciously set by unknown persons, we rebought and rebuilt at a huge financial consequence.
“When access to our business was blocked we loaded and unloaded our supplies by hand and operated. We provided restrooms to our guests and those were burned. We always properly dispose of our garbage, many times having to clean up after the general public as they often would leave large amounts of trash behind. These latest rounds of attacks, however, have left us no choice but to hire a lawyer and file a court case to seek an injunction against the resort.
“We continue to lose business daily not being able to properly facilitate our guests. We have been in talks with representatives of cruise lines, tour operators, persons from the harbour and the tourist department to bring tourists back to the island and to the beach. None of that can come to fruition when we are continuously hampered from doing business.
“It gives you the feeling as if you are not allowed to prosper in your own country. St. Maarten has opened up its borders to welcome people from all around the world. They all come here and benefit from our island, yet the local man is the one who always suffers in the end. That will be our downfall as a nation.”
The Daily Herald contacted Mullet Bay Beach Resort representative Clarence Derby for comment, but no reply had been provided up to press time Monday evening.