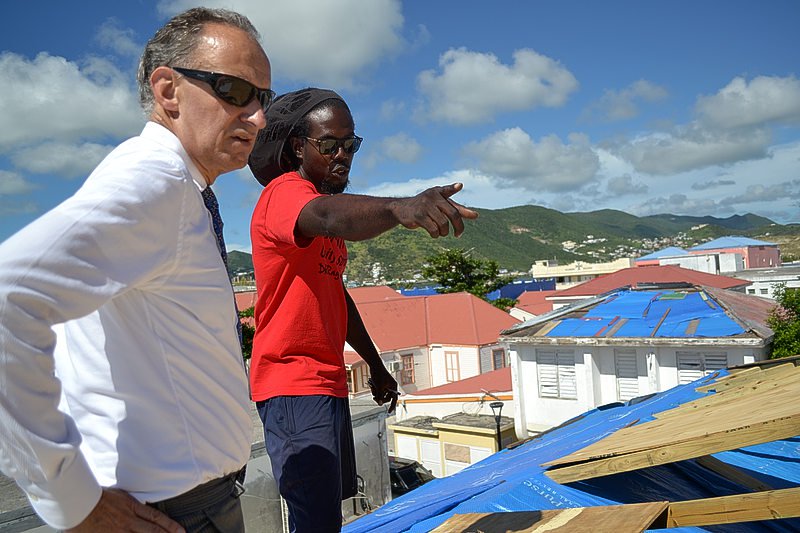 The airport is “still messy,” Arkenbout said. “I am really worried what will happen when more airlines come in at the same time. … I am a little bit surprised it is taking so long [to rebuild – Ed.].”
The country’s private sector has proven with its post-Hurricane Irma bounce-back that it is “strong.” This is reflected in “more life” returning to Philipsburg and other commercial areas in the past two months.
Similarly, the non-governmental organisations (NGOs), such as St. Maarten Development Fund, were also strong.
The private sector and NGOs give the country a foundation to rebuild better in the post-Irma times, he noted.
The residents have shown commitment to their country by doing their best to clean up and recover. Now, the “big damage” must be tackled with precise priority projects, he said. Top of the list are bettering telecommunications, restoring electricity fully and ensuring there is access to drinking water in all areas.
Government now needs “to get its act together a little faster” to add its voice to the much-needed overall recovery of the country. Arkenbout added that the political situation that will result in at least three governments in some five months is not the best scenario from a recovery standpoint.
“It has been a horrible disaster and St. Maarten will return,” he said as he called on all stakeholders “to come together” and reduce the “fighting and differences.” That approach is “not beneficial after the impact of Irma. Get over the differences, the challenges are not that big. It’s time to look forward.”
“There are many people wanting assistance in the community,” he said. These needs must be met in the interim and when the Dutch recovery fund of 550 million euros is dispersed possibly via the World Bank.
The tackling of social issues must take a position high on the priority list and with it safety and security, Arkenbout said. “Safety is a big issue” for residents and visitors and the need for more security personnel cannot be underestimated for a tourism-driven country.
Mental health issues must also be tackled. He said the Mission had received a letter from the Mental Health Foundation calling “for attention” to this sector of health care and social challenges. The call is not unexpected, Arkenbout said. “I see the resilience of the people, but everyone had an experience [in Irma – Ed.]. … We should think of something to tackle this.”
A combined approach to safety concerns, health matters and unemployment is (re)training programmes for displaced workers. “Why not offer them training … with some compensation. That would be an interesting idea and a step in building back better,” he said.
The programme would target especially persons from the tourism and hospitality sectors who were rendered jobless due to business closures. Training would mean they learn new viable skills and/or better the ones they have in preparation for reopening of resorts and other businesses. This idea has been shared with the team working on the National Recovery Plan (NRP) on behalf of Government.
With constant, often political talk about the Dutch using the Irma disaster to take over the reins of government, Arkenbout said residents’ response to the Mission has been different and they know the Mission is here to assist them. People now understand what the kingdom means and saw it manifested in different ways such as the navy ship Karel Doorman entering the harbour.
He believes the struggle of Hurricane Maria-ravaged Dominica has also highlighted the benefit of St. Maarten being part of the Dutch Kingdom. “In Dominica, the recovery is even slower, because it stands alone without the backing of another country like the Netherlands or France. … There you see the contrast.
Looking back on his two-month assignment here, Arkenbout said there had been many “impactful moments,” from the resilience of the people and their willingness to help themselves to seeing the transformation of the country from the early Irma days to its physical state now.
Arkenbout returned to the Netherlands on Friday where, after a brief vacation, he will take up the post of Director of Legal Infrastructure within the Department of Justice and Security in The Hague. He is succeeded as head of the Dutch Mission in St. Maarten by Nico Schoof, who will oversee the continuation of ongoing emergency phase projects.