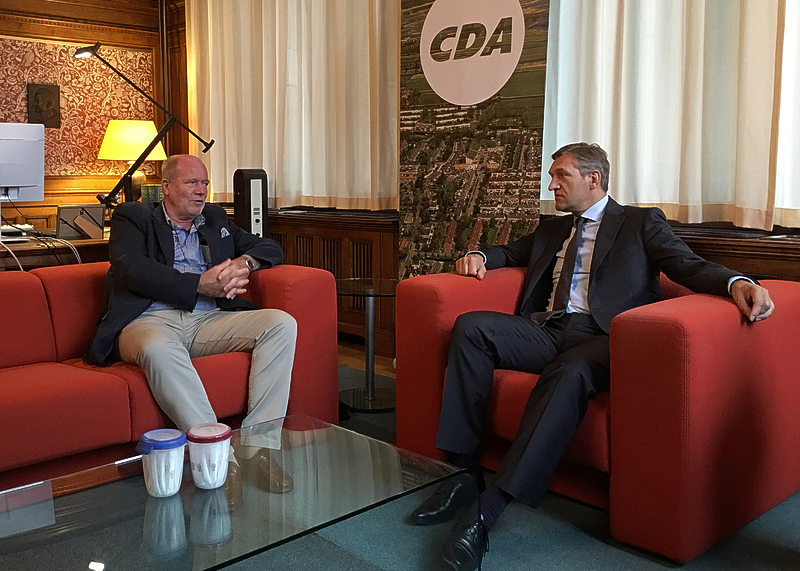 THE HAGUE–St. Eustatius Island Council Member for the Statia Democratic Party (DP) Koos Sneek will be attending the upcoming congress of the Dutch Christian Democratic Party CDA as candidate number 49 on the CDA slate for the March 15, 2017 elections for a new Second Chamber. He will start campaigning very soon.

Sneek, the only candidate from the Caribbean Netherlands to participate in the Dutch elections, has received an invitation to be present at the CDA election congress in Barneveld this Saturday. At this congress, the draft election programme of the CDA will be discussed and approved with the input of the party members. The congress, where CDA Leader Sybrand van Haersma Buma will speak, will also serve as the formal kick-off for the elections.

The CDA draft election programme includes a part about the relations within the Dutch Kingdom and the Caribbean Netherlands. Sneek was asked to give input for this part. Sneek said he considered it “unique” that as an island representative he was able to contribute to the paragraph in the election programme which reflects the party’s vision on what is important for the islands.

Three main issues were highlighted: poverty alleviation especially among the elderly and families with children; the improving of the economic perspective, and the enhancing of the infrastructure on the islands. “Our main issues have become part of their main issues,” Sneek told The Daily Herald. This newspaper already reported the news late November 2016 that Sneek would be running on the CDA slate.

Besides these three main issues, the CDA election programme also stated that the Netherlands has a special responsibility for the people of Bonaire, St. Eustatius and Saba. “The Second Chamber is also their representation of the people. The regulations imposed by the Netherlands too often result in unnecessary bureaucracy. A realistic budget of upkeep is required where it concerns the investments by the Netherlands on the islands.”

The election programme also stated that there is a joint task for good governance on the islands; and, wherever possible the islands should be enabled to carry out more tasks, close to their citizens. “Wherever things go wrong the Netherlands will take its responsibility as National Government in a serious manner in the interest of the people.”

Together Bonaire, St. Eustatius and Saba make up the Caribbean Netherlands electoral district number 20, the youngest constituency of the Netherlands. This is the first time that the CDA has included an island representative on the slate for a national election. “I am very grateful to the CDA that it has taken the initiative as the first national party to include an island representative as a candidate on the list,” said Sneek.

The CDA and DP Statia have initiated a cooperation and Sneek, in the meantime, has become a member of the CDA, alongside his membership of the DP Statia. Sneek has started preparations to campaign on all three islands, and talks are taking place with political parties in Bonaire and Saba in order to muster more support from the voters.

According to Sneek, it is important for the islands to feel more involved in Dutch politics and to feel represented in the Netherlands. “Since the transition in 2010, the discontent of some groups of society has increased. One of the reasons is that they don’t feel represented in The Hague. They feel that our interests are not sufficiently served,” he said.

“Dutch politics is a long distance affair for the people on the islands and mostly touches on issues that don’t concern us, but because of the link between the CDA and DP Statia, and my candidacy on the CDA slate, will now make the Christian Democratic representation also our representation in Parliament. People like to vote for someone they know and with my place on the CDA list that will become possible,” said Sneek, who moved to St. Eustatius 30 years ago.

The second reason for the increased discontent has to do with the fact that some people feel as if they are treated as second-class citizens by the Netherlands. The poverty on the islands, the weak local economies and the deficient infrastructure has a lot to do with this. “An inequality is felt in comparison to the people on the other side of the ocean.”

Sneek has committed himself to try making the CDA the largest party in the Caribbean Netherlands. The point of departure is not to be elected into the Second Chamber, which would also be a bit unrealistic considering Sneek’s slot on the CDA slate. “The aim is that we will now have a party that represents us in Parliament, a party that is committed to the islands, a party with whom we can share our concerns,” said Sneek.

In past elections, the turn-out on the islands has been rather low. Sneek is encouraging people to vote in the upcoming elections. “You have to cast your vote if you want to feel represented. Vote for a party that also serves your interests. I think that the CDA does exactly that.”

Sneek was subsequently invited for a meeting in The Hague where he also met with Chairperson of the CDA Board Ruth Peetoom at the CDA party headquarters and with CDA Senator Sofie van Bijsterveld. Since then, there has been an exchange of information which enables the CDA Members of Parliament to get a better view on what is happening on the islands.