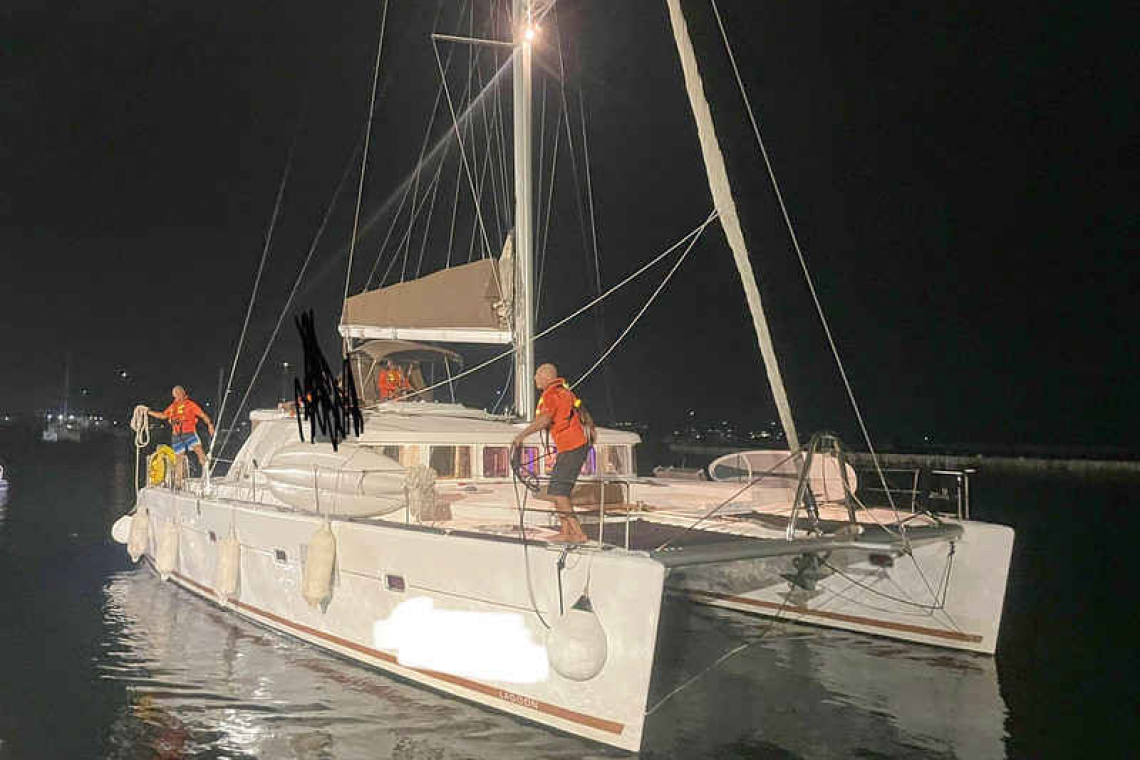 MARIGOT–French-side sea rescue service SNSM responded to a “mayday” call from a catamaran with an injured crew member on Saturday, November 20.

The Antilles-Guyane regional rescue and surveillance centre CROSS-AG contacted the St. Martin SNSM station at 6:55pm informing them that the skipper/owner of a 51-foot catamaran bound for St. Martin from the Virgin Islands had collapsed in the cockpit, hit his head on the deck and was unconscious.

His female companion, the only other person on board, called for help on VHF channel 16. CROSS first transmitted a “mayday” to see if any vessels in the vicinity could come to his aid; then it sent the SNSM to assist. The catamaran was then 18 nautical miles northwest of St. Martin.

The semi-rigid Rescue Star, a faster and much less dangerous vessel to complete a transfer in the open sea, was out of service for repairs, leaving only SNS 129, Notre-Dame de la Garoupe.

Eight volunteer crew members set sail at 7:30pm. As they were leaving Marina Fort Louis, CROSS asked them to wait, as it was in conference with Service d’Aide Médical Urgente (SAMU) to see if a SAMU doctor and a nurse should join them on board.

However, the SNS 129 crew, including a medical person, an ambulance driver and a fireman, was given the green light by CROSS to go to the area without waiting for an additional medical team from SAMU.

Forty-five minutes later, SNS 129 was on the spot as the catamaran continued heading towards St. Martin sailing on a single engine at six knots. It was then 15 nautical miles from Marigot.

SNS 129 approached the catamaran on its starboard side to transfer four crew members and their medical equipment. This tricky manoeuvre for two vessels in the middle of the sea was successfully carried out. Two crew members immediately attended to the victim, while the other two took charge of the catamaran and continued to make their way towards St. Martin.

The victim had fallen in a very narrow space and received a heavy blow to the head. He was immediately put on oxygen and a full check-up was carried out, but the medical crew considered that it was too difficult to extract him from his position, as the victim weighed more than 120 kilograms and transferring him to SNS 129 would be far too risky.

Therefore, they all remained on board the catamaran and made their way as best they could, on a single engine with a headwind, towards Marigot at an average speed of seven to eight knots. With oxygen, the victim quickly regained consciousness and was able to answer basic questions.

SNS 129 with its four remaining crew members set course for Marigot and returned to its berth at 9:30pm. The crew members then walked to the ferry terminal to wait for the catamaran to dock at 9:55pm. The fire brigade (pompiers) arrived 20 minutes later and evacuated the victim to the hospital in Marigot at 10:45pm.