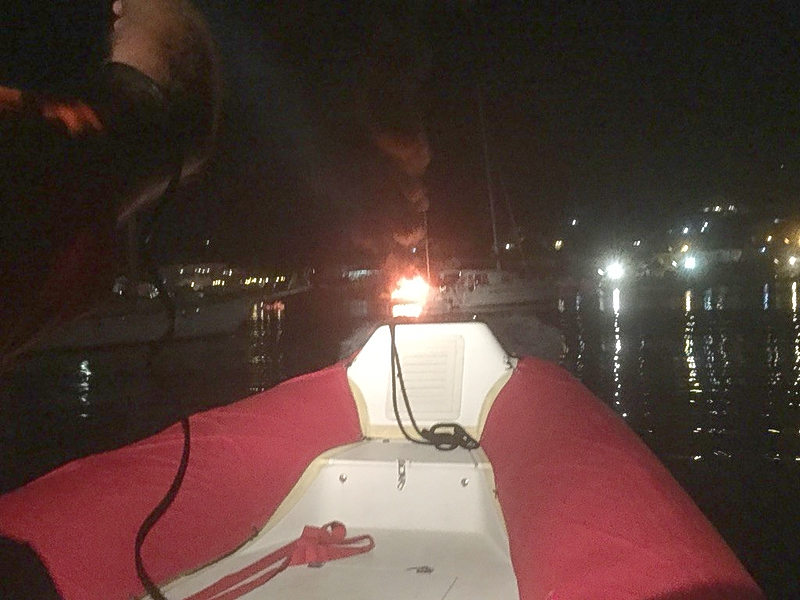 MARIGOT–French-side sea rescue SNSM volunteers were called out on Saturday, January 21, at around 11:00pm to a fire on board an eleven-metre long sail boat reported by a witness, and located 200 metres from Marina Royale.

Six members of an SNSM crew responded with the Rescue Star rigid inflatable boat (RIB) together with firefighters to a vessel AIITA, but no flames or smoke were visible. The witness insisted he had seen flames coming from this boat.

One of the SNSM crew and a fireman went on board to investigate. They found a padlock forced open and an alarm sounding which they manged to turn off. It appeared this vessel had been “visited” because of the mess inside but there was still no evidence of fire. It was concluded the witness may have mistaken a flashlight for flames.

The SNSM crew and firemen returned to the Fort Louis Marina, but were then told by the surveillance monitoring station CROSS that it was another boat on fire with one person on board. Both crews were then scrambled again and returned to the scene where they found a seven-metre long boat Partner located about 30 metres away from AIITA, with its deck in flames.

The firemen extinguished the flames and the victim on board was transferred to the Rescue Star. He was suffering from burns to his legs and smoke inhalation. An ambulance was waiting for him at Marina Royale to take him to the hospital. SNSM crew returned to assist the firemen, but the fire was already put out and the boat sustained major damage.

The cause of the fire is under investigation. Rescue Star returned to the dock at 1:10am, Sunday.