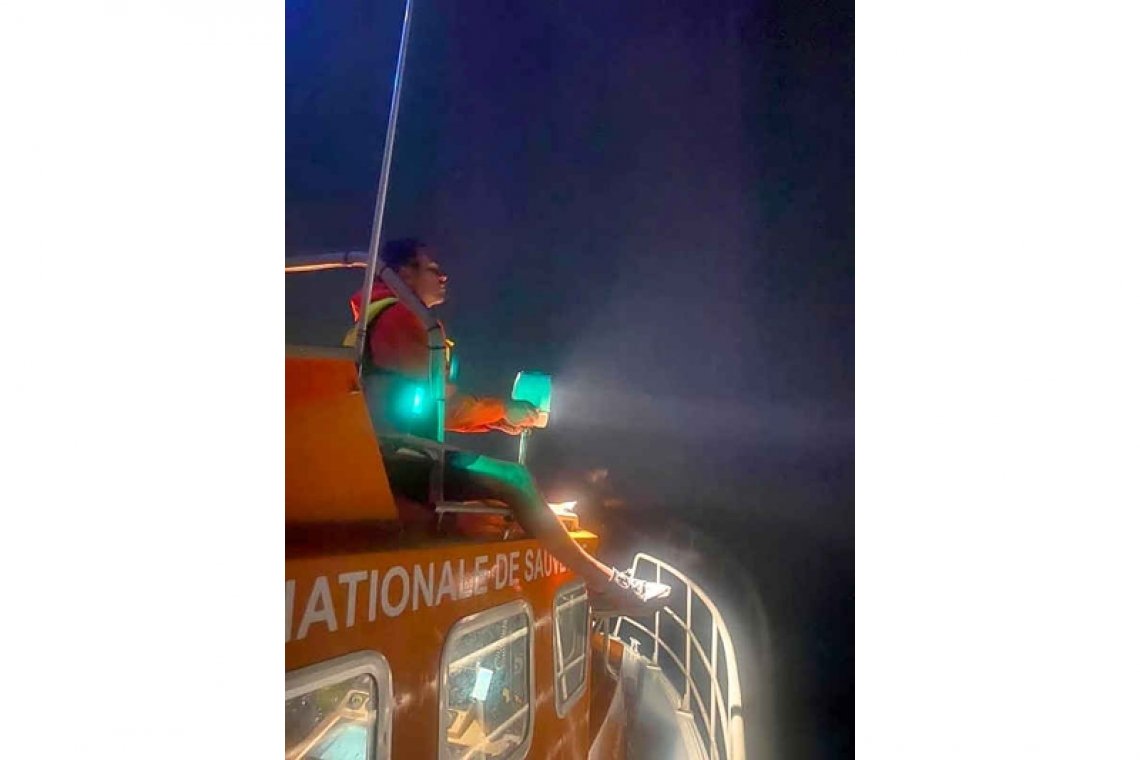 An SNSM crew member scans the sea with a searchlight during the mission to save three swimmers. (SNSM photo)

MARIGOT–Volunteer lifeboat crews from sea rescue services SNSM from St. Martin and St. Barths were deployed in the late evening of July 31 on a mission to rescue the occupants of a motor vessel that was sinking.

A distraught young man on board the boat managed to reach the Gendarmerie emergency number “17” at 8:40pm to report he was on board a sinking motorboat near Tintamarre with two other people when communication was interrupted.

In the meantime, Orange-Caribbean, at the request of CROSS and the Gendarmerie transmitted the identity and telephone number, as well as the list of the last calls of the person who gave the alert.

At 10:18pm CROSS was able to contact the young man’s parents by telephone. The owner of the boat in question confirmed the boat had set out to sea at 7:00pm for a fishing trip between Tintamarre and Anguilla with his 16-year-old son, a friend of the same age on board, as well as the 47-year-old captain.

The boat was a blue 30-foot boat Cap Camara with a beige awning. None of the people on board could be reached by telephone.

The SNSM crew of St. Barths arrived in the area at 10:25 pm with their lifeboat SNS 269 and began searching for the vessel with Rescue Star from SNSM St. Martin.  A Gendarmerie land patrol also searched near the eco-landfill site and at Wilderness.

Using searchlights and thermal binoculars, SNSM 269 from St. Barths at around 10:43 pm suddenly located three people in the water hanging onto a cooler and wearing lifejackets. They were quickly hoisted aboard and appeared in good health. They confirmed they were the only three on board the sinking vessel.

The swimmers were suffering from the cold after having been in the water for two hours and were lent watch jackets to keep them warm. The survivors were transferred onto the Rescue Star and taken back to Marigot.

The sinking vessel had completely disappeared under water. It had been anchored about three miles north east of Tintamarre in about 30 metres of water. While fishing the crew noticed the vessel was filling with water. They were able to start the engines in an attempt to approach the island, but had to abandon ship quickly afterwards. They did not make a call on the VHF, had no time to use hazard lights, only time to put on their lifejackets and make the last-minute call to “17”

The survivors were fortunate they were spotted in the water as they did not have mandatory lights on their lifejackets. Even when they saw Rescue Star in the distance they could not be heard calling out for help. They were advised not to go out to sea again without having the means of alerting rescue services, without a waterproof bag for telephone, distress signals, and lights on life jackets.