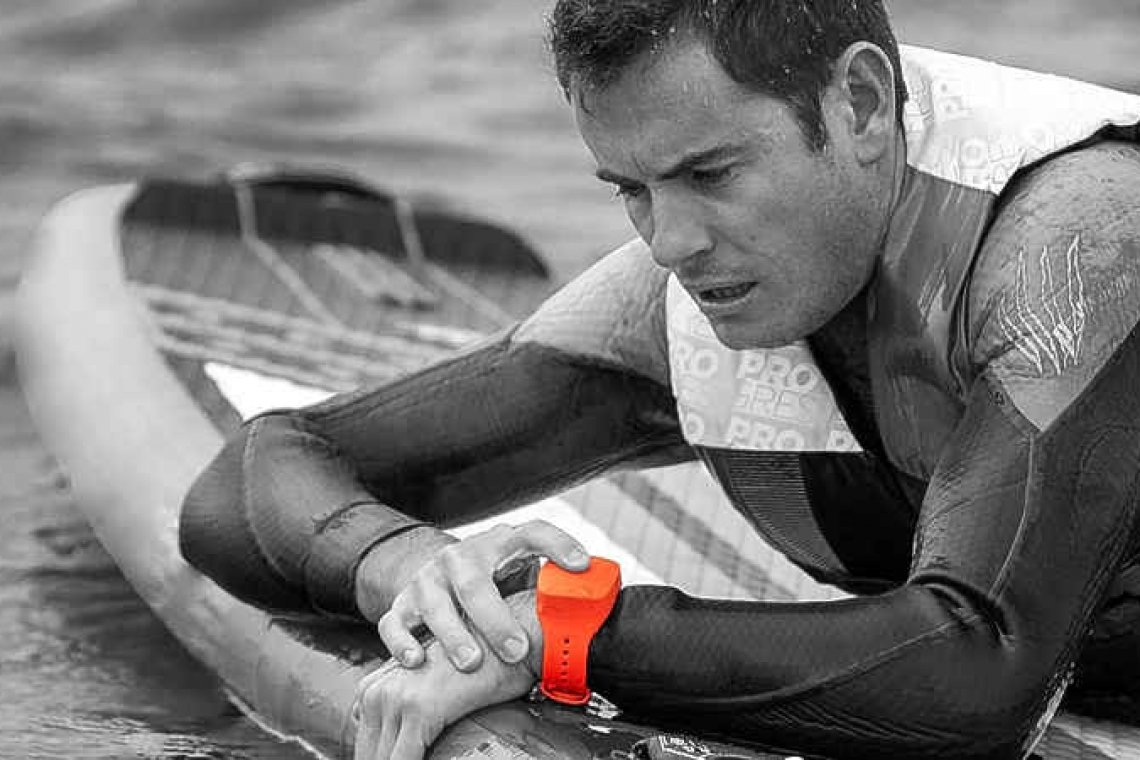 In case of trouble out at sea or an emergency the orange DIAL bracelet can be activated for a rescue.

MARIGOT–French-side sea rescue service SNSM has disclosed that an individual alarm and locating device worn on the wrist will soon be offered to pleasure-boaters and water-sports enthusiasts.

The DIAL bracelet can considerably facilitate the search for people missing at sea. SNSM is currently carrying out tests in the field and they will be available within a few weeks.

In the wake of the tragic loss of teenager Matéo Dorange on Monday evening, SNSM reminds once again that wearing a lifejacket is mandatory for all nautical activities and it is always inadvisable to go out to sea alone, as an accident can happen very quickly.  Regional Operational Centre for Surveillance and Rescue in the Antilles-Guiana CROSS-AG called the SNSM St. Martin station at 7:31pm Monday, August 31, to search for a young man missing at sea. The parents had called the 18 hot line at 6:45pm and alerted the Fire Brigade that their son had not returned from his outing in a kayak.

A Gendarmerie patrol went to their home and learnt that the teenager often went out alone in his kayak in the Bay of Cul-de-Sac, watched by his father from his terrace. But that evening, the father lost sight of his son for a few minutes and no longer saw his kayak. He went down to the anchorage to look for him in the Bay, where he found his son’s empty kayak drifting.

At first, there was hope that his son was not far away, somewhere in the Bay near the rocks, or even on Pinel Island, and that maybe he had accidentally separated from his kayak. The father searched all the places where his son could be but without success. He then alerted the rescue services.

A Gendarmerie foot patrol and firefighters searched the area by the water’s edge also without success before contacting CROSS, which issued a “Mayday” to boats in the area.

At 7:26 pm, CROSS engaged Leonard, the firefighters’ vessel, then five minutes later, SNSM. SNSM departed with two teams of volunteer rescuers on Rescue Star and lifeboat SNS 129. The Dragon 971 was also deployed as well as the Dolent from the Gendarmerie’s Nautical Brigade.

As for each search operation, CROSS assigns a different zone to each rescue vessel, while the helicopter flew over the Bay with its searchlight.

Several hours went by without any sign of the missing young man. In the meantime, social networks lit up with notices of the disappearance quickly shared. It was hoped the young man, who is autistic and does not necessarily react like everyone else, had hidden in a garden shed or somewhere else.

Sadly, the SNSM team discovered the young kayaker’s lifeless body in two metres of water about 10 metres from the shore around 11:00pm. He was in a swimming costume, but without a life jacket. An SNSM diver went into the water to recover him and the Rescue Star went to the Cul-de-Sac dock accompanied by the Dolent to take care of the body.

The SNSM station of St. Martin conveys its deepest condolences to the parents and family of the young man who passed away.