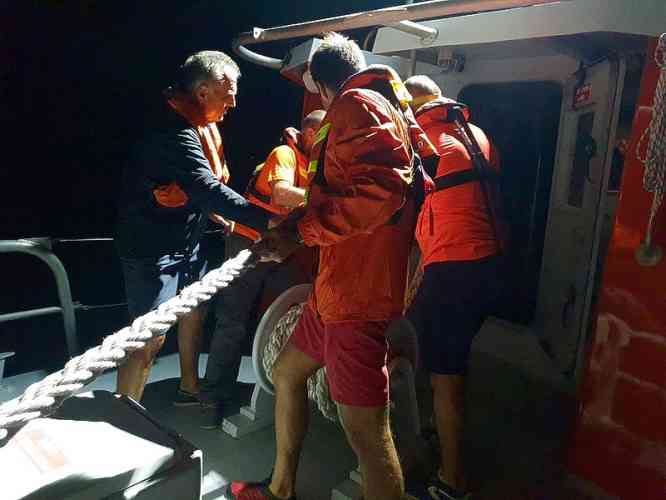 MARIGOT–French-side sea rescue service SNSM was called out recently to help a yacht in trouble in the vicinity of Tintamarre Island.

The 12-metre yacht with two sailors on board had left St. Barths last week Friday afternoon to spend a weekend on Tintamarre with friends. The call came through to SNSM from surveillance centre CROSS at 9:30pm. The sailors had a problem with their mainsail when one of the battens got stuck on the mast, preventing the sail from being raised or lowered. They then found that the engine had broken down.

The crew then decided to anchor between Pinel Island and Tintamarre. Despite help from their friends from the other yacht the engine could still not be started and the sail could not be unstuck without damaging it. There was also concern about the anchor not holding because of big ground swells.

The crew decided their only other option was to call for towing assistance. An SNSM crew of six volunteers left Marina Fort Louis on SNS 129 (Notre Dame de la Garoupe) at 10:25pm and arrived onsite 40 minutes later. The yacht was towed back to Marigot, arriving at 12:40am, where it was safely anchored in the bay. The two sailors were very grateful for the tow.

SNSM reminds the public that there is no charge for a tow when a vessel and persons need to be rescued. On the other hand, for other situations towing trips are charged and priced according to the official scale defined by the Headquarters of the National Sea Rescue Society depending on the size of the vessel to be towed and the nautical intervention means used by the station.